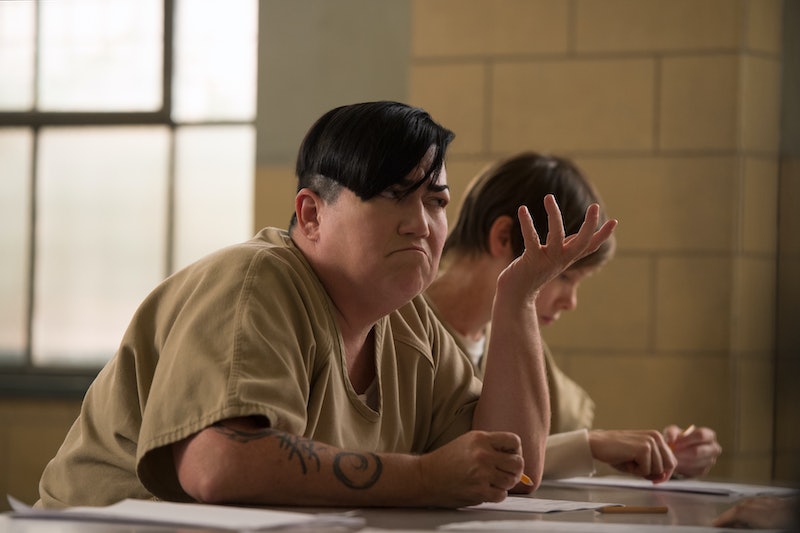 Spoilers ahead for Orange Is The New Black Season 7. Orange Is The New Black's seventh and final season ties up the stories of many of the Litchfield inmates we know and love, but some notable characters are nowhere to be seen for the majority of the season. One such person is Big Boo, who was introduced as a snarky bit of comic relief in Season 1 and later grew into one of the most prominent members of the series' ensemble. We don't see where Big Boo is in OITNB Season 7 until the show's final moments, but fans should nonetheless get some closure knowing she's still doing well and surrounded by friends, even if yes, she's still in prison.

During the season's closing sequence, we're shown an Ohio-based prison — which we know is in Ohio because Alex is there following her transfer — where a table of Litchfield alums are seen enjoying a meal. Norma is there, as is Gina, Yoga Jones, and Anita. Before anyone can say anything, Big Boo makes an important announcement. "I have to take a dump," she proclaims. She then leaves the table, presumably to take the aforementioned dump, and that's the last that fans ever see of Carrie "Big Boo" Black.

It's a sudden and uneventful ending for the character, but an uneventful life may be the best thing for Big Boo. When Orange Is The New Black first introduced her in Season 1, the only concerns she had (aside from being in prison) were taking care of her service dog and sneaking screwdrivers out of the maintenance shed to masturbate with. As the show went on, however, she ended up getting involved in drug trades, revenge plots, and an ongoing romantic entanglement with Linda from MCC after she got stuck in Litchfield during the riot. After that, and her temporary kidnapping at the hands of Piscatella, Big Boo was taken to a separate facility before eventually landing in Ohio alongside her former Litchfieldians.

While some of the show's central characters, like Daya and Nicky, have changed a great deal since OITNB's premiere, Big Boo hasn't changed all that much. We don't have much to go off of following the events of Season 5, but it appears as though the riot didn't affect Boo as deeply as it did, say, Taystee or Caputo. In the end, she's still serving out her sentence and trying to make the best of things.

It's a simple yet fitfully crass sendoff for the inmate, who's always been beloved for her bluntness and wit. While other characters may have gotten more meaningful goodbyes, Big Boo's final scene reflects the nature of life in prison, and life in general, for many people. There is no greater transformational story arc at play for Big Boo, no massive events every year that reshape and redefine who she is. Big Boo is left simply going through life, one dump at a time. And hopefully making some jokes along the way.