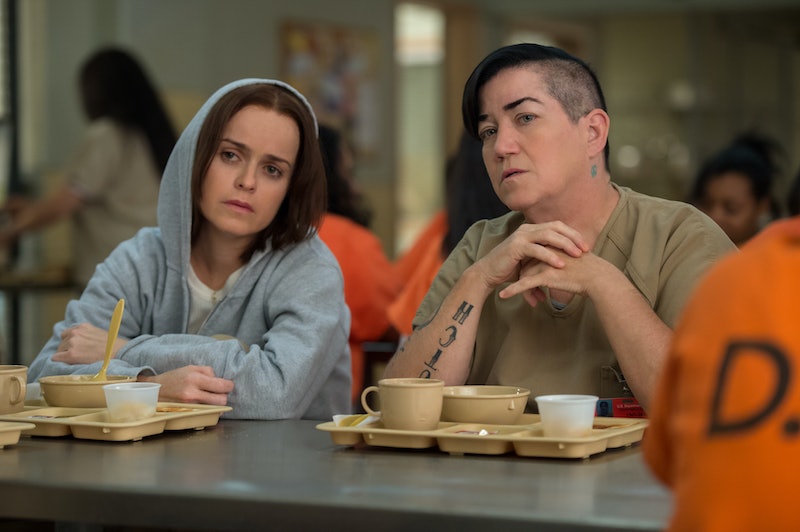 New prison. New inmates. New conflict. A whole new season of Orange Is The New Black is out and there are some massive changes in the lives of the former Litchfield inmates, who are still reeling from the prison riot last season. But not every Litchfield inmate has followed the key players of the riot to maximum security, meaning that the cast for Season 6 has shrunk considerably. One of the characters many fans hope is still along for the ride? Big Boo, one of the most forceful personalities in Litchfield. But where is Boo in Season 6 of Orange is the New Black?

Boo, played by Lea DeLaria, was rounded up after the riot and sent, along with a few of the other minor characters from Litchfield, to a maximum security prison in Cleveland. And, unfortunately for Big Boo fans, other than one scene in Episode 3, the Casanova of Litchfield doesn't get any screen time on the show this season.

Cosmopolitan reports that showrunner Jenji Kohan indicated that the cast of the show might be pared down a bit in Season 6 to focus on the key players and tighten the narrative, and that certainly has proven to be true. It's great to be able to really dig into the storylines of just a few of the main characters on the show, but it does mean that some of the most memorable inmates, like Big Boo, don't get much airtime.

But Big Boo fans, don't despair! Though Boo only features in one Season 6 scene, it's an incredibly memorable one, especially for those hoping that the awful MCC executive Linda Ferguson sees some more punishment for her actions. If your Season 5 knowledge is a little rusty (it's been a long break!), remember that Linda, who dated Caputo and seemed to display little to no sympathy for the inmates of MCC prisons, found herself caught in Litchfield when the riot began. In order to save herself from retaliation, Linda made up a backstory as the 'Counterfeit C*nt of Connecticut' and tried to pass herself off as an inmate. In the process, she found herself in a relationship with none other than Boo.

While Boo seemed to genuinely have feelings for her new girlfriend, her affection for Linda did a rapid 180 degree turn once she discovered a picture of Linda with Caputo on her cell phone. Hurt and angered by Linda's betrayal, Boo revealed her true identity to the rest of the prison, who did not take so kindly to the news that someone from MCC was hiding among them. Boo later sabotaged Linda's attempts to convince the SWAT officers during the raid that she is actually an MCC employee by claiming that she also worked at MCC, making Linda look absolutely ridiculous and landing her in Max with the rest of the rioters.

So, when she appears in Season 6, Boo is witnessing Linda's final humiliation. The former couple have ended up in the same cell block in Cleveland, a cell block that has become infested with head lice. While some inmates, such as white supremacist Helen Van Maele, are already rocking a bald look ("Chrome dome," she comments to the CO), the rest are required to have their heads shaved. Boo and Ouija look on with mirth as Linda is plopped into the barber's chair, pleading with the CO to let her go.

"I told you, I'm not supposed to be here," she says as she's forced into the chair. "I'm an MCC executive. You're making a huge mistake!" Boo laughs up against the wall. "He really is," she says in response, "but I'm enjoying it so much." In a cruel twist of fate, as Linda's hair is being shaved off, guards arrive to inform her that, in fact, she has been identified and is free to go. So she has half a head of hair as a souvenir from her time during the riot. As Linda walks away (threatening to fire the guy who shaved her head) Boo can't resist getting in one last jab at her ex. "Look on the bright side, hon," she says, "At least the lice are gone... up top, anyway." Linda might have manipulated her, but Boo still got the last laugh.

Even though Boo might not be a big character in Season 6, that doesn't mean she won't be featured in future seasons. After all, with so many characters and storylines to juggle, the OINTB writers are always switching around which plots to focus on, and which characters to give screen time. Actor Lea DeLaria, who plays Boo, hasn't announced that she'll be leaving the show, and something tells me that Boo will be back soon.

But in the meantime, one thing's for sure: while the inmates of Litchfield Max won't miss Linda Ferguson, Orange is the New Black fans will definitely be missing Big Boo this season.