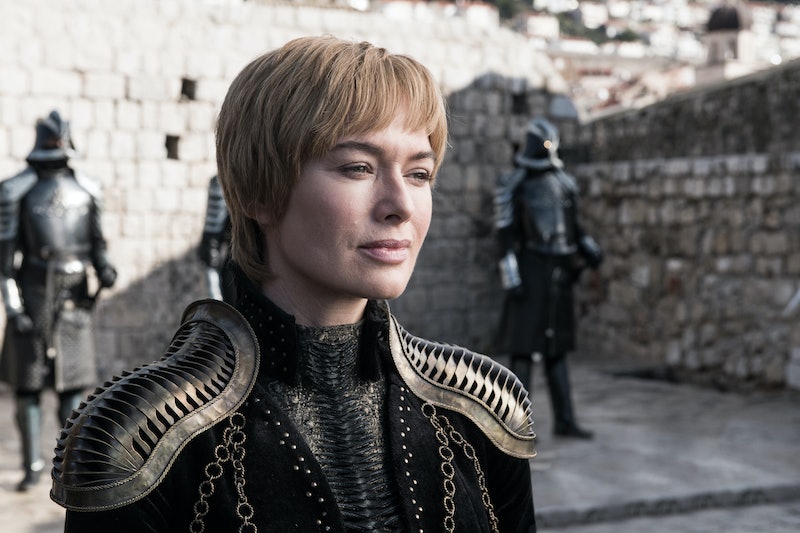 Last week, Game of Thrones made a point of checking in with most of the show's central characters, allowing fans to see where their minds were at right before the big battle. However, there was one person who was completely MIA from the episode: Cersei Lannister. We know she's currently holding her ground at King's Landing, but is there any big update we should know about? Where will Cersei be during the Battle of Winterfell? Could this be yet another episode where we don't see her? One theory suggests that she could actually be in more danger than any other character chilling (quite literally) up in Winterfell.

Reddit user qp0n has come up with a rather genius prediction, theorizing that the Night King won't be at the Battle of Winterfell, but will instead take his ice dragon, Viserion, to King's Landing, thereby allowing him to add a million more members to his Army of the Dead. It's a logical move to make, really, considering he has hundreds of thousands of wights and White Walker generals to distract the people of Winterfell so that no one will have time to notice what he's up to. Plus, it means he wouldn't have to risk losing Viserion in the battle since Daenerys has two dragons and he only has the one. It's a smart strategy and the Night King is no fool.

So what exactly does this mean for Cersei? Well, if this theory actually does come to pass, then nothing good, that's for sure. Either she will become a member of the Night King's army or she'll somehow manage to strike up a partnership with him, basically becoming a Night Queen, of sorts. (And really, if anyone can smooth talk the leader of the dead, it'd be Cersei.)

However, if that doesn't turn out to be the case, then it seems she'll just be hanging out in King's Landing as per usual, waiting to see who ends up winning the Winterfell battle, so she knows what to prepare for when their attention turns her way. She's hired the Golden Company and has Euron by her side, so she's not completely vulnerable, but they'd be no match if the Night King and his dragon were to make a surprise visit.

It's difficult to know how this will all play out. Most of the focus of Episode 3 will be on the Battle of Winterfell and nothing else. And if you are under the impression that Cersei will magically show up with her army to help save the day from the Army of the Dead, then prepare to be very disappointed. Cersei has no intention of helping anyone other than herself. So she'll either be sitting pretty on the Iron Throne in King's Landing or finding herself at the mercy of the Night King himself.

Let's hope it turns out to be the former rather than the latter. Otherwise, it'll mean very bad news for the survivors of the Winterfell battle. You know, if there are any.