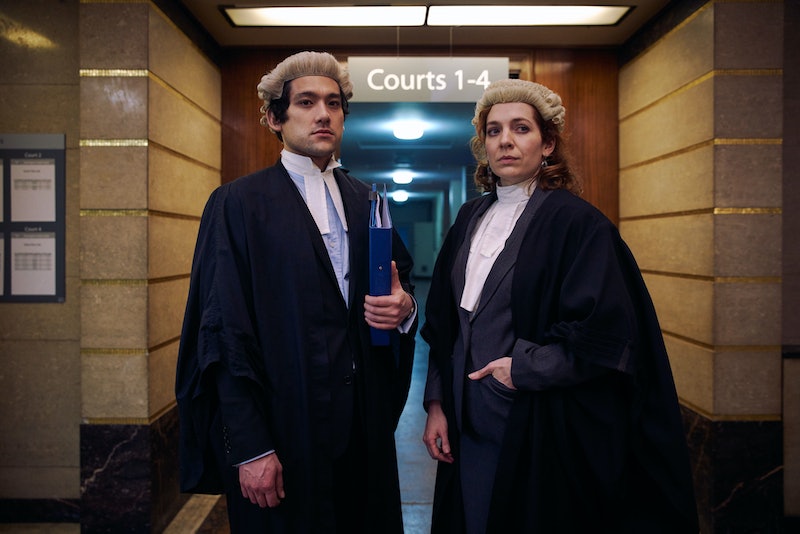 BBC Two's latest series Defending The Guilty takes place in a rather unique setting for a sitcom — the British courtroom. Based on criminal barrister Alex McBride's 2010 memoir, the show follows a similar format to other comedies set in workplaces while following the mishaps of its employees. This time it's on lawyers in and outside the halls of justice. But where is Defending the Guilty filmed?

When watching the trailer, it's not entirely clear as the majority of filming takes place inside corridors and courtrooms. But a rep for the series tells Bustle that Defending The Guilty was filmed across London, which included Ealing and Camden according to film location site Film London. The rep also says that the interior settings took place in real courtrooms, most of which "were disused and now closed".

There are certainly plenty of historic courtrooms like this dotted across the capital to be utilised. Like the Courthouse Hotel in the West End for instance, where actor Katherine Parkinson was fittingly interviewed by the Independent. Once known as the Great Malborough Street Magistrate's Court, the hotel "is a listed building [...] that set the scene for many cases over the years, which were either heard there or taken to full trial at the Crown Courts such as the Old Bailey," the hotel's site reads.

Show creator Kieron Quirke set out to bring McBride's memoir to life even further by letting viewers witness the reality of what lawyers have to deal with. "Too often, lawyers on TV are presented as philosopher kings doing their damnedest against impossible odds, but the reality is sort of morons f***ing up day to day," he told The Guardian.

"What's interesting is that we prefer our legal stuff on TV to be dramatic, to think that everyone is playing for high stakes and everyone cares about every case that's happening every single day, but I just don't think that can be true." The Guardian notes that Quirke has a solid connection with the series, as the writer's father was also a barrister, which meant he was all too familiar with the "lingo and atmosphere — and its absurdity".

It's also hard not to compare Defending the Guilty with other classic situational comedies like The Thick of It, which gives a satirical spin on the British government. "I did want it to be a bit like The Thick of It because I knew barristers were funny and there's this weird performance element to the job, this desire to win above everything," Quirke said.

"When you couple that with the fact that cases are often so bizarre but that there can be a great deal at stake I thought it would really work as a sitcom."

Quirke definitely had plenty of sitcom-esque material at his disposal thanks to McBride's memoir. It'll be interesting to see which stories make their way into the final six episodes, and whether or not Defending The Guilty will continue further than its first series.

Defending The Guilty starts tonight at 10 p.m. on BBC Two.