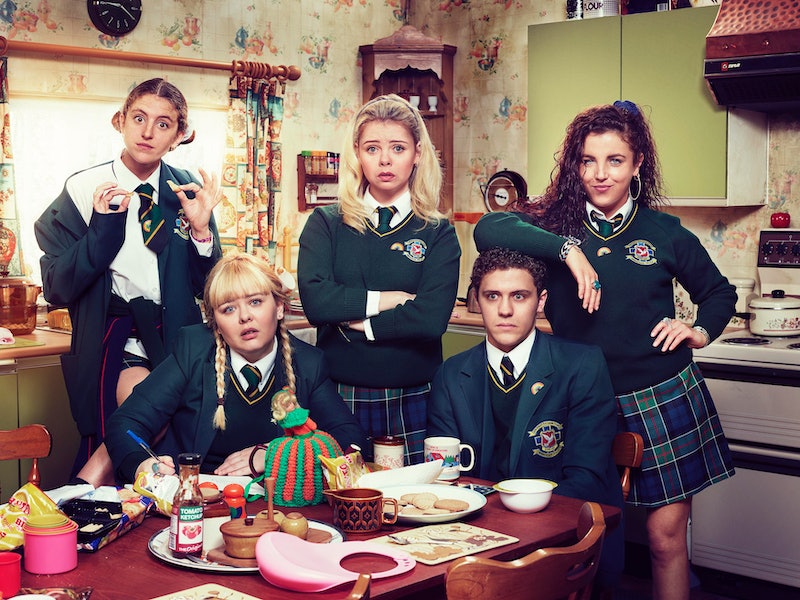 Female-focused comedy is on the up, and its doing a very good job in proving that equal representation on TV is not only necessary, but beneficial for everyone. Because, y'all, they show that, when you give women a voice, we will well and truly nail it. You're welcome. Derry Girls is the coming-of-age sitcom you never knew you needed in your life, but now you can't live without. The show is, obviously, set in Derry in Northern Ireland, but is it true to its name? Is it shot in its eponymous city and, if not, where is Derry Girls filmed?

It turns out that, yes, the show is largely shot in Derry, according to Northern Ireland Screen. However, some of the scenes (including in he much-loved chip shop) are filmed in other parts of Northern Ireland, mainly its capital of Belfast.

Northern Ireland has long been a hit with film crews owing to its great natural beauty. Shows such asGame Of Thrones and Death And Nightingales showcase the stunning landscapes of Northern Ireland. Whereas shows such as The Fall and Derry Girls are shot in the busy cities of Ulster. (Interesting trivia: did you know that Rihanna's video for We Found Love was shot in both rural Ulster? In a delightfully funny twist, they had last-minute location issues. It was supposed to be shot on a farm, but the production had to move because the religious farmer was horrified by all of the raunchiness taking place on his land.)

Derry Girls is a show that tackles some seriously heavy issues, as it is set during the Troubles, which took place in Northern Ireland in the late 20th century. Speaking to the Irish Times about her inspiration behind the show, writer Lisa McGee said:

"It wasn't even going to be set during the Troubles, really. I just wanted to write about me and my friends, and the way we behaved in school, leave the Troubles out of it. But that didn't feel truthful either, because I don’t have an experience without it."

McGee also spoke about her desire to create a show that had female leads, as she believes "a lot of stuff about Northern Ireland is very male." McGee said:

"I always think of when you were young, and you heard some story, this boy, or that boy pushed some lad in a trolley down a hill, or whatever. But you'd never meet the fellas who did it, you'd just hear the story. I want my girls to be the people who did the thing you heard about. I want them to be the urban myths themselves."

And she isn't kidding about the Derry Girls characters becoming legends. The storylines are unforgettable, including the girls being accused of killing an elderly nun; the home of a very intimidating local chip shop owner almost burning down; and, of course, that coming out story.

The second season of Derry Girls kicked off this month, with 2.5 million viewers tuning in to see what the girls have been getting up to, according to to Independent.ie. The first episode sees the girls hanging out with people from a Protestant boys school in the interest of improving relations between both sides of the fence. And, yes, it leads to all the obvious implications of arranged fun between an all-female school and an all-male school.

The second season has six episodes, and pick ups shortly after where the last season left off.

Watch Derry Girls every Tuesday night on Channel 4, and catch up on anything you've missed on All 4.

More like this
Nicola Coughlan Just Revived 'Derry Girls' In The Most Unexpected Way
By El Hunt
At 28, Lesley Manville Was Acting, Picketing, & Singing Kate Bush Songs
By Olivia-Anne Cleary
Prince Charles Revealed What He *Really* Thinks Of 'The Crown'
By Sam Ramsden
Nicola Walker Is Confident About Emma & Ian’s Future
By Frances Stewart
Get The Very Best Of Bustle/UK