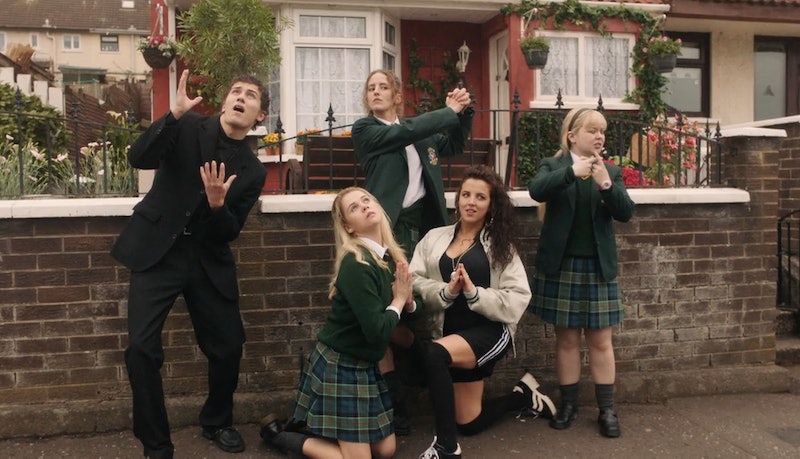 A lovable group of misfits living in 1990s Northern Ireland is headed to Netflix. Derry Girls premieres in the U.S. on Dec. 21, but the coming-of-age comedy set during Ireland's Troubles is already a hit across the Atlantic. So not only was Derry Girls renewed for a Season 2 already there, but the series has finished filming its sophomore season. And based on the glowing reviews in the U.K. and the fact that there are only six 30-minute episodes in the first season, you'll be as anxious as the rest of Britain for Derry Girls to return as soon as possible.

Derry Girls follows four Northern Ireland high school girls — and one "wee English fella" — in Londonderry (known as Derry). The show is set during the last years of the Troubles, which was the decades-long violent conflict between unionists (who wanted Northern Ireland to stay a part of the U.K.) and nationalists (who wanted Northern Ireland to separate and join the Republic of Ireland as a separate country). Derry Girls premiered in the U.K. back in January and really resonated with audiences. As Ireland's The Daily Edge reported, more than 2.5 million people watched the show during its premiere week, and Channel 4 decided to renew it just after one episode. The director of programming for Channel 4 even tweeted about the early renewal, encouraging people to watch.

While people in the U.K. may have more of a personal connection to the subject matter, American audiences should be grateful that Netflix picked up Derry Girls. The Guardian ranked the new comedy as the sixth best television show of 2018 — ahead of shows like Atlanta and Sharp Objects. And there's a good chance more of Derry Girls will come to Netflix, since the show has already finished filming Season 2 for the U.K.'s Channel 4.

Since the show is so popular, creator Lisa McGee hasn't been revealing too much about what will happen in Season 2. But the Belfast Telegraph reported that the show was filming on location on Derry on Nov. 15. From the American flags prominently featured, it appeared the show was recreating Bill Clinton's trip to Derry in 1995. The New York Times noted how President Clinton was involved in trying to create peace in Northern Ireland and this trip was a part of the peace process. McGee had previously told Radio Times that the American president's visit was something she wanted to cover in Season 2.

Star Jamie-Lee O'Donnell, who is from Derry, told The Irish Times that Season 2 is "definitely as good, if not better, than the first season." She also noted that the humor of Season 1 that made the series so beloved has been kept intact. "Lisa has really outdone herself. We hit the nail on the head for the first season so the humor is quite similar," O'Donnell said.

It's not official that Season 2 of Derry Girls will come to Netflix. But another Channel 4 show, The IT Crowd, is on Netflix in its entirety, so that's a good sign for future seasons. But first, Season 2 needs to air in the U.K., which the Irish Film and Television Network reported should happen in early 2019. And don't expect Derry Girls to duck out after two seasons. The Irish site Joe noted how the website Broadcast reported that Channel 4 was in "advanced talks" about a Season 3 with production company Hat Trick Productions. So you might eventually get to see these Derry Girls living in a time of political peace — even if these high schoolers' personal lives continue to be in turmoil.

More like this
Nicola Coughlan Shared A Lady Whistledown Excerpt From ‘Bridgerton’ Season 3
By Grace Wehniainen, Alyssa Lapid and Sam Ramsden
Devi Is Going To Meet A “Smoldering Bad Boy” In ‘Never Have I Ever’ Season 4
By Jack Irvin and Gabrielle Bondi
New ‘Lupin’ Part 3 Teaser Hints That Assane Will “Go Out In Style”
By Brad Witter
The ‘You’ Season 4 First Look Shows Joe’s New Identity And Potential Victims
By Bustle Editors
Get Even More From Bustle — Sign Up For The Newsletter