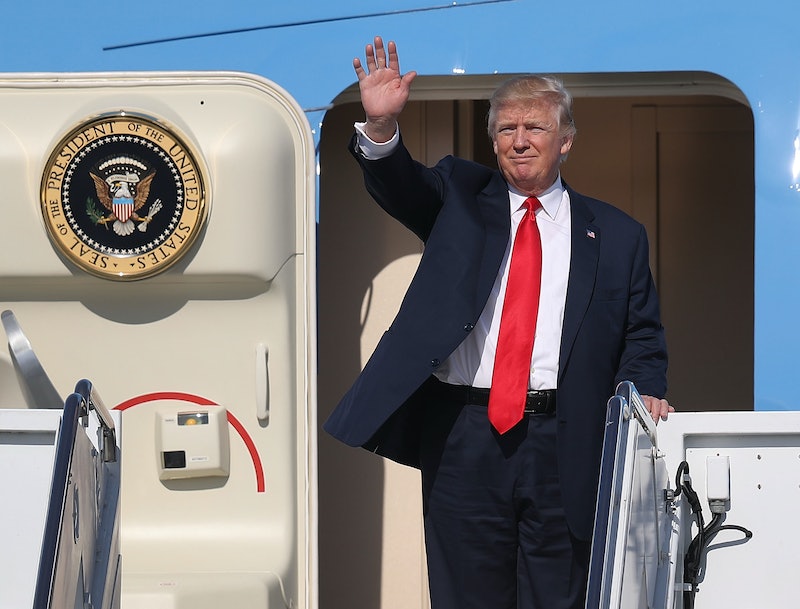 According to an alert issued by the Federal Aviation Administration (FAA) on Thursday morning, President Donald Trump's Christmas plans might include a Mar-a-Lago stay — one of his favorite resorts — for 16 days. According to the FAA alert, Trump may be at the resort in Palm Beach, Florida, from Dec. 21 to Jan. 6.

Bustle has reached out to the White House for confirmation. The FAA advised other aircrafts to avoid the aerial space above what is often called "the Southern White House." Venturing into the designated space would be considered an airspace violation, the agency warned.

In 2017, Trump spent 11 days at Mar-a-Lago during a Christmas trip. At the time, he told the press that his first Christmas at the resort as a president would involve "working very hard," according to USA Today.

But it wasn't all work and no play for the president. The newspaper also reported that the president indulged in golf at the Trump International Golf Course in West Palm Beach, Florida. He also posted some scathing tweets against the FBI.

Big political developments are expected to take place while Trump will reportedly be in Florida for the holidays. For instance, the president might miss the swearing-in of newly-elected Congress members on Jan. 3. This is especially noteworthy given the fact that this time it will be the Democratic Party taking back the House of Representatives from the Republicans.

The report of Trump heading down to Mar-a-Lago for 16 days also comes amid a possible government shutdown, which could take place on the date Trump might leave for the resort, Dec. 21. So far, the president has said that he'd gladly take the responsibility for the shutdown if it indeed happens.

On top of that, the potential replacement for the outgoing White House Chief of Staff John Kelly could be announced as well. Kelly is expected to leave the White House by the end of December.

While this expected trip may be Trump's longest holiday vacation yet, reports of the first family being in Florida for the holidays had already been circulating in the media. On Tuesday in an interview with Extra, Donald Trump Jr. mentioned that he and his girlfriend, former Fox News host Kimberly Guilfoyle, would head down to Mar-a-Lago for Christmas.

"We'll be in Palm Beach with my kids, her kid, my family, my father. It's going to be interesting," Trump Jr. said. Before his father became the president, though, Trump Jr. said the family would go up to their grandparents in Queens, New York.

Palm Beach Mayor Gail Coniglio said (via The Palm Beach Post), "We are certainly grateful to the president of the United States that he enjoys Palm Beach White House."

Logistically, the town could see some traffic due to the law enforcement authorities aiding Trump's Secret Service in the area. The town's mayor also hinted at this in her statement. "The police department and town managers will take the appropriate steps to continue protection for the safety and security of the president and the public," Coniglio said.