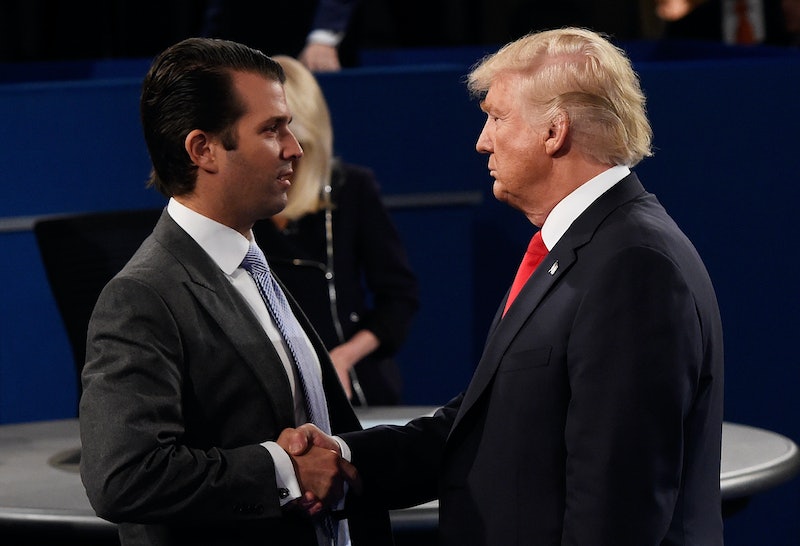 If you've ever wondered what President Donald Trump's philosophy is when it comes to giving gifts during the holiday season, his son has an answer for you. In a brief interview with the entertainment program Extra on Tuesday, Donald Trump Jr. said his dad is a regifter, on occasion.

"I'm the namesake, so I got regifted all of the things that were monogrammed for him at times," Trump Jr. said, as his girlfriend and ex-Fox News anchor Kimberly Guilfoyle stood next to him at a Daily Mail holiday gathering in New York. "There was one Christmas where he may or may not have given me the gift that I had given him the year before because I monogrammed it."

Trump Jr., the president's eldest son, laughed and said that he once called his father out on it. "And I'm like, 'I know you didn't get this,' 'How do you know that?' 'Because I gave it to you last year,'" he said.

He also said that his father was apparently much funnier at the table during the holidays. "If you think my father is funny on TV," Trump Jr. said, "you should see him around the holiday table when everyone is vying for the food."

With his father becoming the president of the United States, Trump Jr. said that their family time seemed sparse and difficult to get hold of. These days, he said, he would have to ask if he could swing by and see his father. Still, he told Extra that he was looking forward to spending time with Trump along with his children and Guilfoyle's child.

"We're going to go down to Mar-a-Lago," he said. "We'll be in Palm Beach with my kids, her kid, my family, my father. It's going to be interesting."

The president's son also recalled how he and his siblings would go to Queens, New York, to be at Trump's parents' place. Trump Jr. said that "we don't have what we used to have" with his father being the president now. Before that, he said that they could go up to Trump's office whenever they wanted for "one-on-one time."

While Trump certainly celebrated the 2017 holiday season with his family, he also took to Twitter. On Dec. 23 2017, Trump tweeted, "How can FBI Deputy Director Andrew McCabe, the man in charge, along with leakin' James Comey, of the Phony Hillary Clinton investigation (including her 33,000 illegally deleted emails) be given $700,000 for wife’s campaign by Clinton Puppets during investigation?"

Then on the same day, Trump also did some gloating. "The Stock Market is setting record after record and unemployment is at a 17 year low," he tweeted. "So many things accomplished by the Trump Administration, perhaps more than any other President in first year. Sadly, will never be reported correctly by the Fake News Media!"

At one point in the Extra interview, Guilfoyle chimed in and said that the president's commentary around the holiday table seemed "better" than his Twitter, which is where he often verbally feuds over politics and much more. Trump Jr. agreed and said that it would have been "a wonderful thing" if he could upload those comments online.