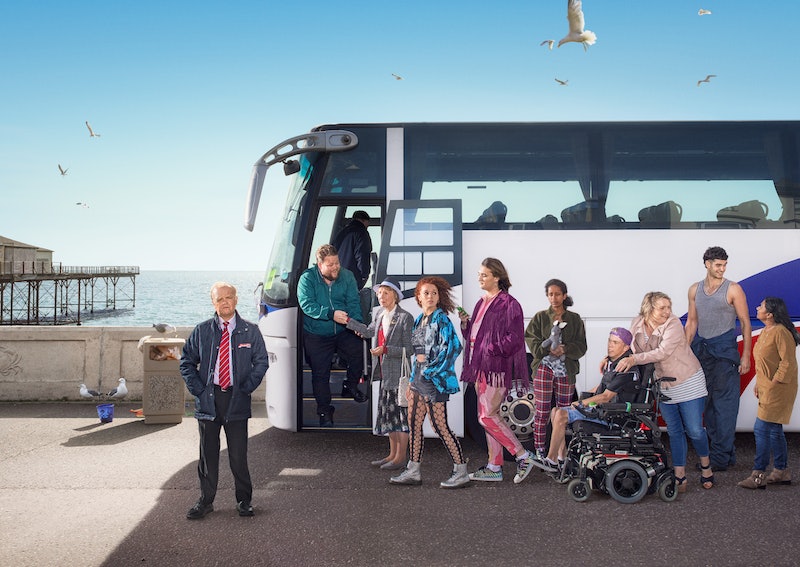 The BBC is maintaining its name for producing great comedy, with shows like Fleabag, This Country, and People Just Do Nothing proving the old Beeb most definitely still has it. However their latest comedy, Don't Forget The Driver is not only bringing the LOLs but also opening a dialogue about immigration, Brexit, and human rights in contemporary Britain. So, where is Don't Forget The Driver filmed? Is it here in Britain? And, if so, what parts? Because I don't know about you, but it looks pretty similar to a few places I've been.

So, viewers of Don't Forget The Driver will know it's set in Bognor Regis, and turns out it was filmed there also. As a matter of fact, the TV show's co-writer Tim Crouch is a born and bred Bognor boy. Speaking to the local paper, the Bognor Regis Observer, Crouch spoke about his love and knowledge of the area, and about showing co-writer and actor Toby Jones around town:

"It’s been a joy to weave a story into the fabric of a town I know so well. I brought Toby to Bognor earlier this year and showed him around. Our visit had a definite effect on our writing. I had a clear idea of where characters lived, the journeys they make, the sights they see. Toby and I spent a day walking around and developing our story. We ate fish and chips by the pier. We sat in the West Meads shopping precinct. We talked to people in Butlin's. We stood on the pebbles and looked out to sea."

The area of Bognor Regis has astounding natural beauty and is a historical British seaside town. During the 18th and 19th centuries, it became a place for the uber wealthy to reset and get away from that toxic city air. However, with the coming of the railway line, day-trippers became a thing and, according to a local history site, "Many believe that was when the town started its slow decline."

According to iNews, Arun (the district where Bognor is located) voted 62.5 per cent to leave the EU in the Brexit referendum, making it the perfect setting for a programme about Brexit and immigration. The thing ism though, in this show, neither the words Brexit nor immigration are actually uttered. Speaking to the BBC, Jones explained why they didn't want to use that language specifically:

"We were very keen to avoid using language that has been so overused that it has become emptied of significance. So you’ll never hear the 'B' word [Brexit]. You won’t hear us saying migrant, you won’t hear the word refugee. We were very careful to avoid that, we wanted the action to speak for itself."

Don't Forget The Driver is about a fed up coach driver who, via one fateful encounter, has his life changed entirely. Although the story's subject matters don't sound like the most light-hearted of topics, this show manages to tackle some serious societal taboos in a digestible manner.

Watch Don't Forget The Driver on BBC Two from Tuesday April 9 at 9 p.m.