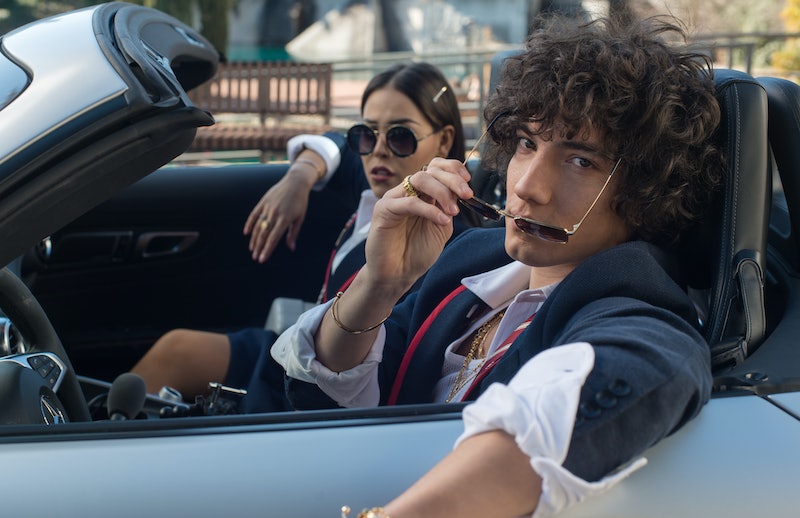 Though most of the show takes place either within the halls of Las Encinas or its students' various homes, fans may be curious where Elite is filmed. With all the elaborate mansions and colorfully lit nightclubs, it does look like a pretty fun place to visit (although some of it could just be due to some stellar set design). It's not said in the show where Las Encinas is located, but considering the prestigious school is fictional, it's likely that the town is made up, too. However, its surroundings are very much real and located in Spain.

According to Variety, Elite Season 1 was partially filmed in Madrid — specifically San Lorenzo de El Escorial, which is a town in the northwest. As for Elite Season 2, they likely used the same filming locations, since IMDb cites both Sierra de Guadarrama (a mountain range in Madrid province) and Madrid itself as being the show's two settings (there is both a province and a city called Madrid, which can get confusing).

Furthermore, Netflix announced in July 2018 that they were launching a Madrid-based production facility set to include a 237,000-square-foot campus in the Ciudad de la Tele (TV City), per the Hollywood Reporter. It's unclear if that was completed in time for Elite Season 2, but it does reinforce how much Netflix is investing in Spanish television.

"Spain has a rich heritage of innovative, immersive content creation, and we are excited to strengthen our investment in the cultural heartland of Madrid," Erik Barmack, VP International Originals at Netflix, told THR. "From San Sebastian to Santiago de Chile and Toronto to Tokyo, Spanish-language content is savored by Netflix members across the world. The establishment of our first European production hub will create new opportunities for Spain's incredible creative talent."

According to Variety, Elite's second season went into production in January 2019. Though most of the cast's Instagram posts about filming aren't geotagged, some of them do cite Madrid as their location. However, for some viewers, it may feel like the show is taking place in the U.S. "[A]fter the release of the first season, I read a couple of comments from people saying that the show presented a very 'Americanized' reality, with the posh uniforms, the lockers in the corridors, the school dance at the end of the school year, the trophy… things that admittedly are not very common in Spain," one of Elite's showrunners, Carlos Montero, told Entertainment Weekly.

He said there's a good reason for that, though. "It's not that we were trying to be American, it's that some very posh schools in Spain are doing things the American way because parents and students have all seen those U.S. movies and TV shows and that is their idea of a 'cool' education," Montero continued. "It's their way of attracting customers/students, almost as if the brochure for the schools had a 'As seen on TV' sticker in it. A lot of things 'American' about our show are in there because in Spain we also take a lot of things from American culture in our everyday lives."

So though the show may be filmed in Spain, it kind of has a universal presence.