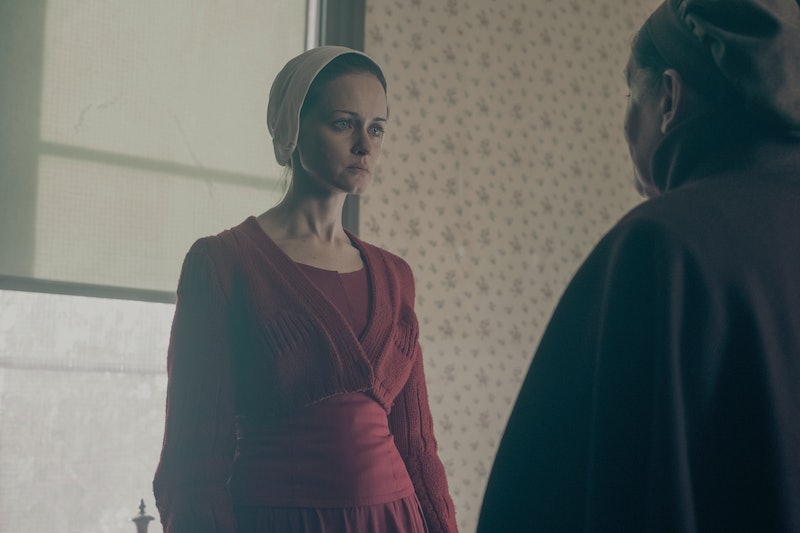 In the episode, June pleads for Serena to advocate for small change in Gilead and Serena loses a finger for trying. Eden's death really seems to have moved many of the women in Gilead to take more drastic action. If a 15-year-old is willing to die for love, how is this oppressive society really "saving the children?" Not only have the wives started second-guessing their situation and worrying about the future of their own children, an underground network comprised mostly of Marthas throw together a last ditch effort to get June and her daughter out.

Meanwhile, Emily attacked Aunt Lydia with a knife at her new home. Then, Commander Lawrence, who literally said "nah" to the ceremony with her and maintained an ominous wildcard tone throughout the entire episode, then whisks her out of the house and drives her to an undisclosed location where she meets June and a driver willing to get them both out of there. "Godspeed," he says. "I'm getting myself in deep shit. Have a nice life. Don't get caught. Keep away from drugs!" It was a strange choice of parting words, perhaps, but seemingly heartfelt.

June left her new daughter with Emily and went off on her own, supposedly to look for Hannah. So where exactly are Emily and baby Holly going? Probably Canada, given the method of transportation, the urgency, and the fact that there doesn't seem to be any other safe havens that close by, that we know of just yet.

Maybe Lawrence and June can team up in The Handmaid's Tale Season 3. Now that June is staying in Gilead to save Hannah (and maybe Rita, and Nick, and do some damage too, by that avenging angel look in her eyes) she's going to need some new partners in crime. Not only would Bradley Whitford and Elizabeth Moss working together be a twisted West Wing reunion, their characters' dark senses of humor would make for a interesting pairing. Plus, we've got to learn more about his hidden wife and his role in possibly creating Gilead.

If Emily makes it to Canada, what do you think the odds are that she'll find Luke, Moira, and Erin? If Nick was able to run into Luke in a bar, then it shouldn't be too hard for Emily to reconnect with the others, even if the only information she has about June is a picture of Hannah and her mother's first name.

Will she find her wife Sylvia, and their son Oliver there as well? Emily mentions in the episode that her son's seventh birthday is only a week away. She could very well find him in time to celebrate that in Little America, depending on how quickly things move.

That said, knowing The Handmaid's Tale, there is always the possibility that Emily doesn't actually get out. At the end of Season 1, it looked like June was headed straight from the back of a van to Canada, and that did not work out at all. Then again, it's unlikely that the show would pull the same fast one on audiences twice, right? Commander Lawrence seems high up and well-connected and seemed to want to protect her. Plus, only he and his Martha know that Emily killed Lydia.

Gilead is not forever, even in Margaret Atwood's book. The downfall of the dystopia may take a while, but the end is in sight for future generations at the bare minimum. Emily has survived the worst of this world. She has been raped, mutilated, poisoned, and separated from her family. She resigned herself to dying in Gilead a long time ago, and now that might not happen. She could hardly believe that she was getting out, and it's the biggest "victory" this show has ever had. Hopefully.