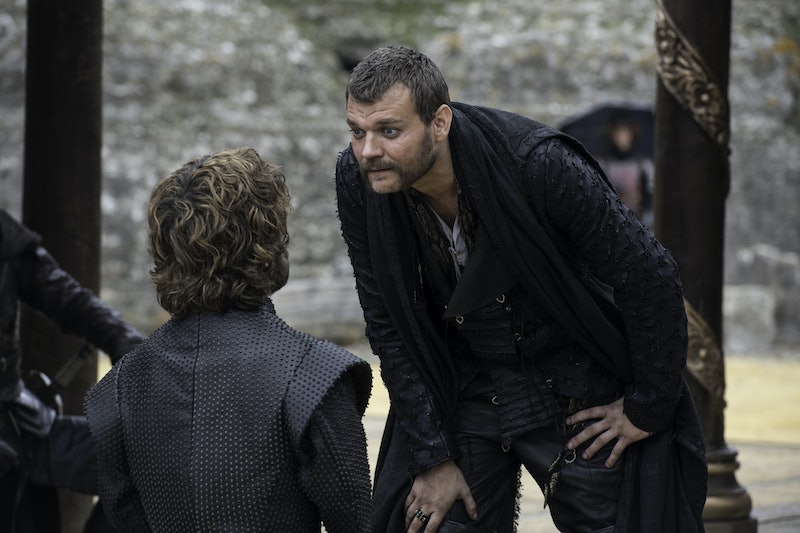 There are only six episodes of Game of Thrones left, and a LOT of characters that still have to die. Some of them might not, but some of them seem primed for a fatal comeuppance, such as Euron Greyjoy. Game Of Thrones built a reputation on creating a world where the villians win, but later seasons have proven that even the worst people in Westeros aren't safe from the grips of death. At the end of Season 7 of Game Of Thrones, Euron Greyjoy appears to be trying to get out of dodge, but it's hardly likely that Euron will win the Iron Throne by simply opting out of the War Between The Living And The Dead.

Following Jon Snow's TED Talk about the nature of the undead, Euron claims to be sailing back to the Iron Islands to keep himself safe from the threat of the wights and the White Walkers, who have figured out how to cheat death but not a way to cross a barrier of water. He suggests to Dany that he'll be able to wait out the others and take the Iron Throne once the coming winter has ended, which boldly presumes there will be a throne left to sit on. But of course that was all just a ruse.

Cersei later reveals to Jamie that Euron is actually sailing to Essos to gather more ships for Cersei. It seems the two are using the deeply existential threat of an army of the undead to swoop in and maintain the throne while everyone else is distracted trying to save humanity.

While there is a massive threat to all of Westeros that is preoccupying the attention of nearly everyone that isn't Cersei Lannister, there is one person who may be more interested in removing Euron's head than saving the world — Theon Greyjoy. After escaping an attack from Euron that resulted in the death of the Sand Snakes and the kidnapping of Yara, Theon's primary objective is to save his sister the way she once saved him. Theon hasn't done much to try and redeem his character aside from rescuing Sansa Stark, but felling Euron and saving Yara could be the redemptive moment that he needs to become stronger than the trauma and torture that he's been put through and absolve him of the cruelty he exhibited while leading the ironborn to Winterfell.

Of course, there's also a chance that a million other events could occur that will bring an end to Euron before Theon gets to him. If he ends up sailing to an Essos city that is friendly with Daenerys, he may learn that the Mother of Dragons has orders out to any trusted allies to kill him. Alternatively, should Euron come across a single Dothraki, it's unlikely that he'll stand much of a chance against one of Essos' greatest warriors.

Euron Greyjoy will be starting Season 8 with some big plans and a vision of the Iron Throne in his future firmly planted in his mind, but clearly Euron is unaware of the fact that while you can live a long time being evil in Game Of Thrones, the matter of death one faces at the end of their life is often befittingly cruel for the person who is dying.