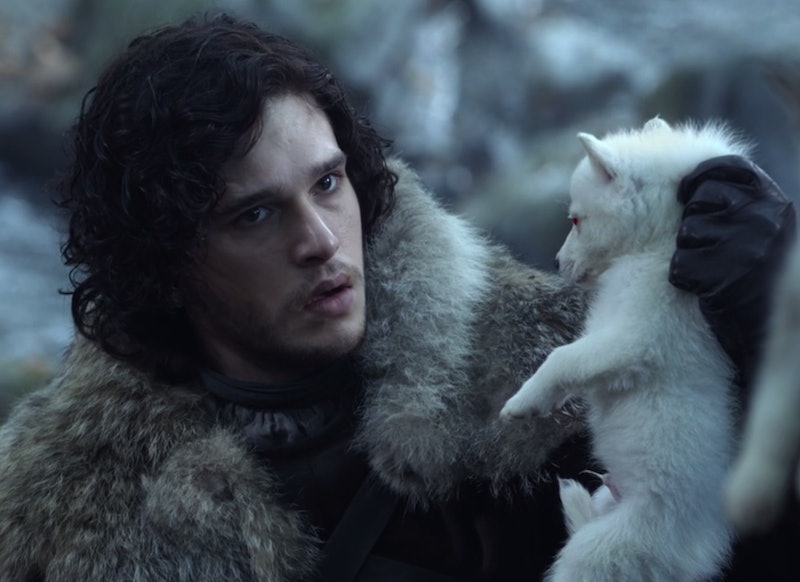 Once upon a time there were six direwolves and six Starks (ok, five Starks and one Snow bastard) and the world was happy. That lasted like one single episode though, because this is Game of Thrones, and murder and tragedy are just part of the game. Over the last seven seasons, four of the direwolves have died, just like several of the Starks have died. One of the two remaining direwolves on Game of Thrones is Ghost, Jon Snow's wolf. (The other is Arya's wolf Nymeria who has been on her own in the wild since Season 1.) But Jon Snow's animal hasn't been seen in a while, so where is Ghost in Game of Thrones Season 8?

Throughout most of Game of Thrones, Ghost has been faithfully by Jon Snow's side. Jon originally found the pup — the runt of the litter — and took him in as his own. Ghost traveled with Jon to the Wall when Jon joined the Night's Watch in Season 1. Incidentally, Ghost found the show's first example of wights, and alerted Jon to the danger. He later saved Sam from a wight as well.

In Season 4, Ghost was separated from Jon for nearly a year while he was held captive in Craster's Keep. Upon his escape, he joined Jon to help out in the Battle of Castle Black. His loyalty to Jon came in extra handy in Season 6 when Jon was stabbed to death. Ghost's howls alerted Davos to the presence of Jon's body and move it to safety.

While Melisandre tried to bring Jon back to life, Ghost watched over his buddy's body faithfully. It's actually the direwolf who is the first to see Jon wake up.

From there, Jon takes Ghost with him to Winterfell, where he plans to battle Ramsay Bolton. Jon doesn't allow Ghost to participate in this fight, since he doesn't want his wolf to meet the same end Rickon's wolf Shaggydog did in Ramsay's hands. After winning the battle, Jon re-enters Winterfell and Ghost comes along with him. That's where Ghost is last seen, so he's now presumably still at Winterfell with Sansa while Jon and Daenerys prepare for war.

The pup didn't get nearly enough screen time in Season 7, but that's about to be remedied in Season 8. Visual effects supervisor Joe Bauer promised Huffington Post that Ghost has quite the storyline in the upcoming season. "Oh, you’ll see him again," Bauer told HuffPost about Ghost. "He has a fair amount of screen time in Season 8." He added that the wolf is "very present and does some pretty cool things in Season 8."

No word yet on what those cool things are, but some fans think they may have spotted the wolf in the Season 8 trailer. The supposed scene he's in is a battle scene with Jorah Mormont. It certainly wouldn't be the first time Ghost has fought for his masters, but here's hoping he can make it out of this war alive. Westeros has lost too many direwolves already.

More like this
Emilia Clarke Shares More Details About The New 'Game Of Thrones' Series
By Maxine Harrison
Why Sadie Sink Is Hopeful Max Will Return In Stranger Things Season 5
By Brad Witter
6 Mind-Blowing Fan Theories About How Stranger Things Will End
By Kadin Burnett
What Working At Marvel Is Really Like, According To A 'Ms. Marvel' Co-Creator
By Gretchen Smail
Get Even More From Bustle — Sign Up For The Newsletter