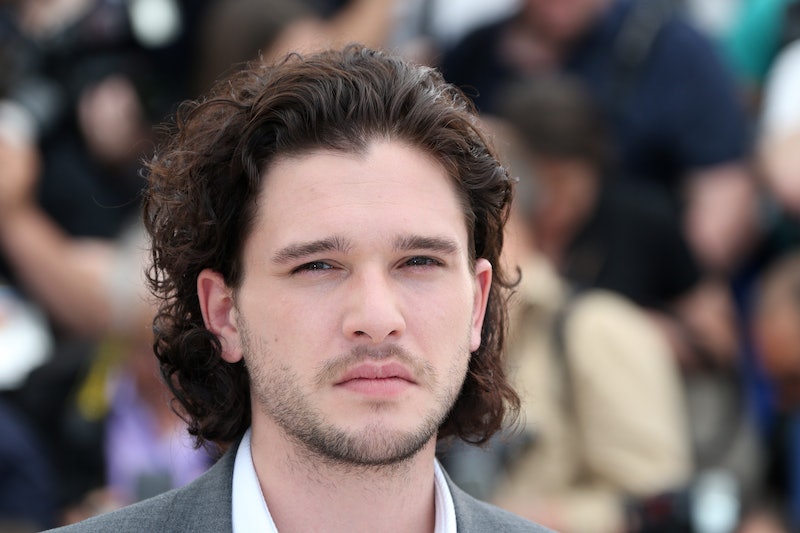 The direwolves of Game of Thrones are a longtime fan favorite. Mythic, giant, and loyal, each one shares (or shared) a special bond with its corresponding Stark kin. One such direwolf is Jon Snow's faithful Ghost, who was a stalwart of the series until Season 7, at which point he became confusingly absent. So will Ghost be in Game of Thrones Season 8? According to the HBO series, only two direwolves remain — and one could belong to Jon Snow.

Season 7 almost had a Ghost appearance, according to a now-deleted tweet by Game of Thrones writer and producer Byran Cogman. "FYI... We shot a Jon/Ghost scene. Didn't make it in. I tried! Thx for watching, everybody," he wrote regarding the episode "Stormborn."

Robb Stark's direwolf, Grey Wind, was slaughtered at the infamous Red Wedding. Sansa's wolf, Lady, was ordered to be put down by Cersei, for something Arya's direwolf Nymeria had done in defense. The Umber family killed Shaggydog to prove Rickon's identity (and their loyalty) to Ramsay Bolton. Summer, Bran's wolf, sacrificed itself in the Cave of the Three-Eyed Raven. This leaves Ghost, Jon Snow's albino direwolf, and Nymeria, who popped up this year for the first time since Season 1. Though Arya and Nymeria had a proper greeting (and goodbye), Nymeria may very well come to play a large role should the Northern armies march South. Not to prize one wolf over another, but Nymeria is so often out of sight and out of mind, whereas Ghost has visibly been Jon Snow's companion for seven seasons.

Feral Nymeria leads a pack of regular wolves that terrorize the Wetlands. Even in the briefest of encounters, she does Arya proud. Ghost, though, has been a friend and fighter since Season 1. There's no one he wouldn't maul for Jon, and that guy has a lot of enemies. (As shown in the Season 7 finale, there are more than he even realizes.) Ghost is as valuable on the battlefield as he is horrifying to randomly encounter. He's a literal symbol of the Stark house. Ghost is loyal to Jon, and those loyal to him; he's a staunch defender of the Stark family and its allies. He's also a fully-grown, powerful, and rarely-seen direwolf. So rarely seen, in fact, that when his sister Nymeria reappeared in Season 7, one glimpse of her nearly broke the Internet.

In the books, of course, the Stark children are able to connect with their wolves in more than one way. Were the Starks able to live long and fruitful lives with direwolves by their sides, they would likely gain the ability to, uh, astral project into them. It makes sense that the showrunners would omit that aspect of the books, but it would help to underscore the significance the direwolves bear.

The spectacular effects of the Season 7 finale were fun, but hopefully HBO will shift some money towards the Direwolf department for next year. If they won't do it just because Ghost is adorable, the fans — and Jon — need a conclusive end to their storyline.

It's nearly impossible to guess where the series will go next, but we need the direwolf question to be answered stat. Oh, and it would be nice to see Nymeria again, too.