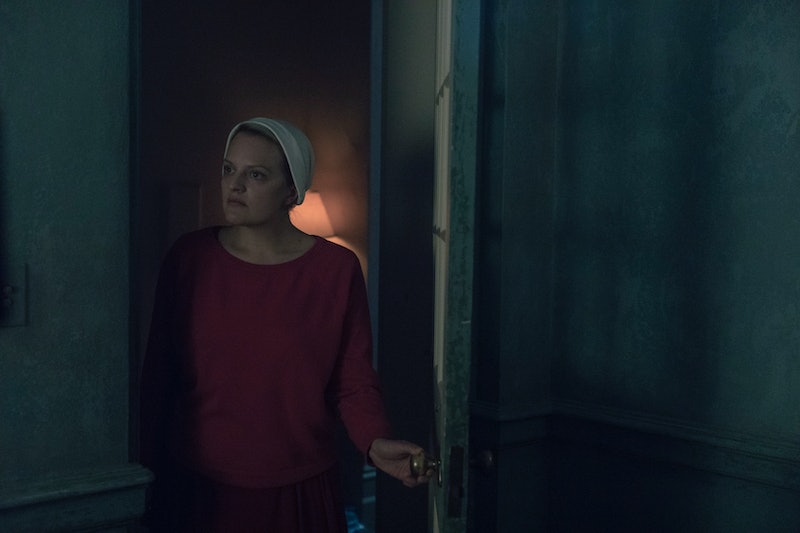 In the July 3 episode, June met with Hannah's Martha to try and arrange another visit. Now that she knows where Hannah's school is in Brookline, she can start to plan. To get there, she persuaded Mrs. Lawrence to leave the house with her, hoping that her mistress' clout would help them get into the school. Unfortunately, everything went downhill from there. The guard who was supposed to let him in was off duty and then Mrs. Lawrence had a breakdown. Later, June discovered that her walking partner OfMatthew snitched on her — and not only was the Martha helping her hung for conspiring, but now June has no idea where her daughter is anymore or how she'll see her again.

Though losing tabs on Hannah, and potentially putting her and her new host family in danger is a major consequence, June is still living in a world where other people pay for her risks and her mistakes more than her, despite her obvious lack of privilege in Gilead. This isn't the first time that someone who tried to help ended up dead while June essentially gets away with open rebellion. June, and wives like Mrs. Lawrence, are able to use their privilege to avoid death themselves, but haven't been successful at using that same privilege to keep others from harm.

We also now know definitively why Mrs. Lawrence has stayed kept up in the house for all of this time. Eleanor has bipolar disorder and it appears that Gilead has not been medicating her. The Sons of Jacob wouldn't be the first religion to refuse prescription drugs. They must have been destroyed — if contraband pills were out there on the black market, Commander Lawrence would have stocked up on them. Despite his clout and position, he cannot get his wife the help she needs and he seems to feel a tremendous amount of guilt about it. It's yet another way that this dystopian society is oppressing its people.

Hopefully, Hannah's new family was not taken to a place like Washington D.C. that is even more tyrannical in the way they treat women, particularly handmaids. There are open houses there, after all. It's hard enough imagining what Hannah's future might hold if she never escapes Gilead, and New England is relatively calm compared to other districts. That's the real question of The Handmaid's Tale in these later seasons. What happens to all of the young girls like Hannah when they grow up? That question may be what finally galvanizes the rebellion to take down Gilead once and for all.

Still, as June is more focused on getting her daughter to safety in Canada than starting a revolution right now, this is a big setback. The best way for her to get information is through the network of Marthas, and they may not be keen on helping her out any time soon.

After June and Emily got baby Nicole out, Gilead is on high alert not to lose another child — especially a female child — and rescuing Hannah just got so much harder.