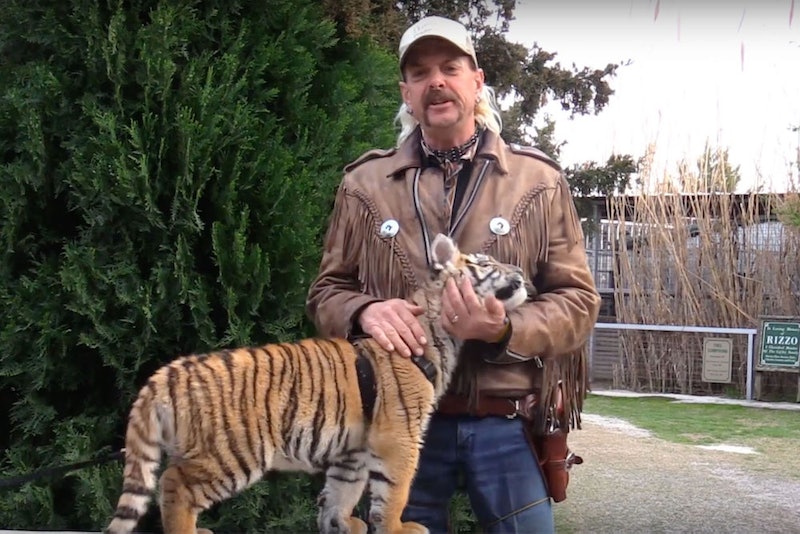 Netflix’s true crime documentary Tiger King: Murder, Mayhem and Madness introduced the world to Joe Exotic, an eccentric wildlife park owner who considers himself the most prolific tiger breeder in the U.S. The wild seven-part docuseries, filled with offbeat personalities and a murder-for-hire scheme, however, has sparked conversation about the ethical issues of owning wildlife. So, where is it legal to own tigers? Netflix’s Tiger King sheds light on the reality of tiger captivity across the U.S. and the globe.

While there is no federal U.S. law that prohibits wildlife ownership, each state has its own set of laws and regulations about exotic animals. Nevada, Wisconsin, Alabama, and North Carolina have little to no state regulations on owning wildlife, according to Michigan State University's Animal Legal & Historical Center. In states like Tiger King’s Oklahoma, as well as Texas, Idaho, Montana, Arizona, Pennsylvania, Missouri, Indiana, Mississippi, Maine, North Dakota, and South Dakota, exotic pet ownership requires some type of permit or license. In these states, owners generally undergo registration processes that include permit fees, liability insurance, veterinary care requirements, and caging standards with state officials.

Across the globe, regulations on big cat ownership vary by country. According to regulations outlined by the Law Library of Congress, Canada, for example, prohibits the private ownership of exotic wildlife as pets in all provinces except Ontario. All zoological and wildlife institutions, however, are allowed to possess such animals with the proper permits. In England, the Dangerous Wild Animals Act 1976 prohibits ownership of such animals. In Mexico, private possession is allowed with proper registrations and compliance with guidelines outlined in Mexico’s Department of Environment and Natural Resources.

Since the debut of Netflix’s Tiger King, the ethics of tiger captivity have been a topic of discussion among viewers and animal rights activists. As detailed in the documentary, Exotic owned around 200 exotic animals, such as tigers, lions, and lemurs, during his stint at Oklahoma’s Greater Wynnewood Exotic Animal Park. In January, he was sentenced to 22 years prison in connection to a murder-for-hire plot to kill prominent animal rights activist Carole Baskin. Exotic was also found guilty of violating the Endangered Species Act after he killed five tigers in 2017.

More like this
'The Catch' Revisits A Famed Irish Filming Spot From 'The Tudors'
By Darshita Goyal
A Guide To All Of Zach Shallcross' 'Bachelor' Filming Locations
By Brad Witter
Everything To Know About 'And Just Like That...' Season 2
By Jack Irvin and Grace Wehniainen
These Brooke Davis Quotes From 'One Tree Hill' Will Never Get Old
By Sabienna Bowman and Jack Irvin
Get Even More From Bustle — Sign Up For The Newsletter
From hair trends to relationship advice, our daily newsletter has everything you need to sound like a person who’s on TikTok, even if you aren’t.