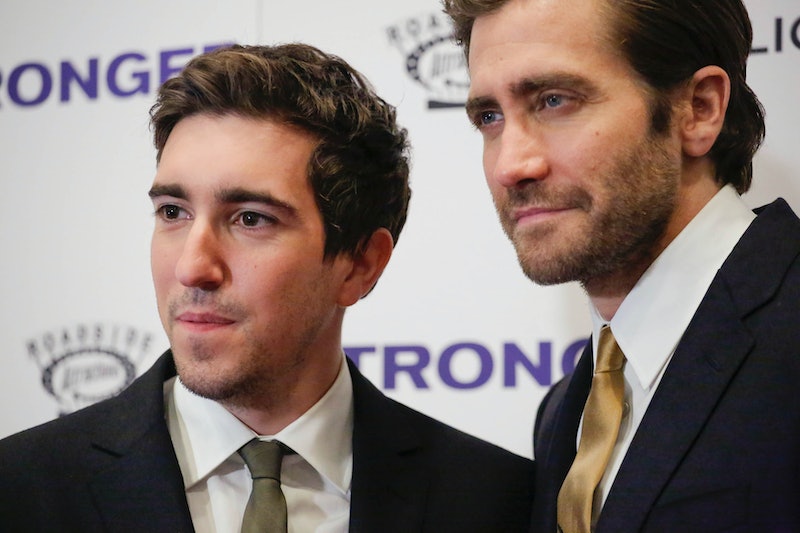 Jeff Bauman became famous in the worst way possible — as the public face of the horrible human toll of the Boston Marathon Bombing. The explosives detonated near Bauman as he waited at the finish line cheering on then-girlfriend Erin Hurley, resulting in a double-amputation of both his legs. A photo of Bauman in shock, rushed away covered in debris, became the tragedy's defining image, and on Sept. 22, his story is coming to the big screen with the new movie Stronger. A lot's happened in the years since the bombing, but where Jeff Bauman is now shows just how far he's come from the senseless tragedy.

Bauman's amputations took place just hours after the bombing. Yet immediately after waking from surgery, still woozy from medication, he contacted the FBI and provided information leading to the identification of Tamerlan Tsarnaev, one of the bombers. Bauman's determined recuperation inspired a city, and a nation. Barely a month after he was discharged from the hospital, he and Carlos Arredondo, the "man in the cowboy hat" from the famous photo, threw out the first pitches at the start of the Boston Red Sox's season.

A year after the bombing, Bauman returned to the job he held for three years prior to his injuries, working the deli counter at Costco. While in the hospital, he and his family were visited by Kevin Horst, a Costco manager who helped walk them through the maze of paperwork and information, patiently explaining Bauman's health benefits. In an interview with Reader's Digest, Bauman says, "I remember my dad asked Kevin if he’d hire me back if I made it out, and Kevin said, “We can’t hire him back, because he still works for us. We’re not going to let him go.”" Horst still takes Bauman to physical therapy appointments, and even brings treats for the survivor's dog Bandit.

Bauman became close friends with Arredondo, too. The "man in the cowboy hot" was spurred to help Bauman because looking at his injuries, he saw his own son, a Marine killed in Iraq, according to The New York Times. Arredondo's two sons, close in age to Bauman, both died tragically, and Arrendodo has said his friendship with the survivor is a source of solace. In an interview with People, Arredondo said of Bauman, “It’s nice to have a friend, someone that age,” he says. “I don’t think this bond is going to end after the cameras go away.”

And it clearly hasn't. In 2016, Bauman and Arrondo finished their first race together, crossing the finish line side by side.

Bauman has obviously experienced a lot, so it's no surprise that he wrote a memoir about his experience and recovery. Stronger, released in April 2014 on the bombing's first anniversary, sees Bauman credit a great deal of his recovery to the emotional support of his then-girlfriend, Erin Hurley. The couple married in November 2014, and gave birth to baby Nora in July that year. The movie centers around their relationship, with the tagline "Love Is Strong." Though the couple announced their separation in February 2017, they remain on good terms.

And now the film version of Bauman's biography is about to be released nationwide. David Gordon Green (Election, About Schmidt) is directing, and Jake Gyllenhaal plays Bauman. There was some controversy regarding Gyllenhaal, who is able-bodied, playing a double-amputee, and Bauman himself had difficulty accepting his on-screen portrayal. In an interview with the L.A. Times, he said, "“At first, I was like, ‘That how Dave and Jake see me? Like a piece of work?’”, though ultimately he credits both actor and director for their efforts. "[Gyllenhaal] got me totally right. But was hard to face it and see that other people saw that.”

Bauman recently walked the red carpet with his on-screen doppelgänger, Gyllenhaal, at the film's premiere in Boston. The "friends and family" screening was held at Spaulding Rehabilitation Hospital, where Bauman spent a great deal of time recovering from his injuries. In a red-carpet interview with Boston.com, Bauman's attending physician Dr. David Crandell said, “I look at this as sort of a next chapter for Jeff, because it’s sort of an odyssey.” Clearly, wherever the journey leads him next, Bauman will still be going strong.