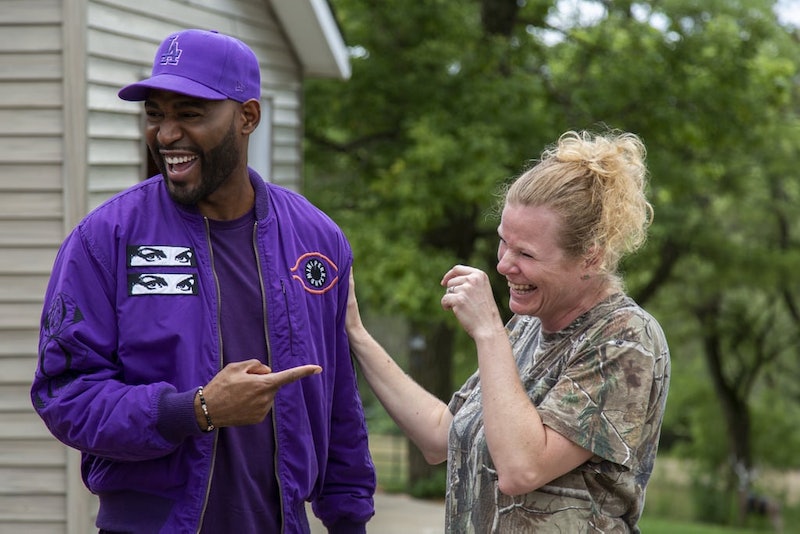 Spoilers ahead for Queer Eye Season 3. Queer Eye's Fab Five made over their first woman in Season 2 had its first women, and now in Season 3, they're giving the Fairy Godmother treatment to Jody Castellucci, a hunting, fishing, camouflage-wearing Missouri native. She lives with her husband — who is so in love with her, it's adorable — and has two grown daughters. She tends to a garden and she doesn't put a lot of effort into herself, so obviously, the Fab Five had to help her put some self-care back into her routine. But did their tips and tricks stick? Luckily, it seems like Jody Castellucci from Queer Eye is still living her best life.

As we see from the show, Jody gives a lot of herself to other things — her garden is extraordinary, her hunting skills are better than her hubby’s (and he loves it), and she loves her daughters. She's also a prison guard, which takes up a lot of her time. And that means that Jody doesn't put a lot into herself. It's not that she doesn’t want to, but it’s that she's lost the chip that teaches her how to. Also, since her brother died, she hasn't wanted to feel beautiful or draw attention to herself, and that leads to wearing a lot of shapeless sacks and bland patterns. But she's a woman, dammit, and she wants to feel like one! She doesn't want to color her own hair anymore (which is a good thing).

Jody's makeover shows that she doesn’t have to give up the tough parts of her to embrace her femininity, and reader, I cried during her reveal. And by the way, the reaction from the Queer Eye guys was 100 percent genuine. "That outfit, the reaction… I don't know if you know this, but our reality show is the most organic, most authentic reality TV show you will ever see," Tan France told Cosmopolitan UK. "We do not reshoot anything, and that reaction was 100 percent genuine."

But in terms of where Jody is now, well, that's a great question. A thorough Googling brought up her as living in Amazonia, Missouri, which we knew from the show, and not much else. As we saw on the show, Jody is an avid outdoors woman, so maybe social media just isn’t her thing. That or she has a secret Instagram account to stalk but not to post (happens to the best of us).

Like its predecessor, Queer Eye For The Straight Guy, Queer Eye's original plan was to make over straight men. That's well and good, but the show is really expanding its range by diving into other pools of people ready to be makeover. When the show debuted in 2018, lifestyle and culture expert Karamo Brown told The Hollywood Reporter that it was really important for Queer Eye to push as far into new populations as it could.

"I really want to keep pushing the boundary of people we are helping because there are so many people who don't feel seen," he said. "We quietly tapped on the senior citizen community, and that got such a big response. I want to dive in with people with disabilities." Jody is just the latest bright spot in a galaxy of humanistic makeovers, and we're all the better for seeing her shine.

More like this
‘The Ultimatum: Queer Love’ Is Officially On The Way
By Radhika Menon and Kadin Burnett
What’s New On Netflix: Meet 'The Real Bling Ring'
By Arya Roshanian
Jinkx Monsoon Is About To Get Real Sketchy
By Sam Ramsden
Kenan Thompson Pointed Out A Super True Detail About 'Friends' In His Emmys Monologue
By Grace Wehniainen
Get Even More From Bustle — Sign Up For The Newsletter