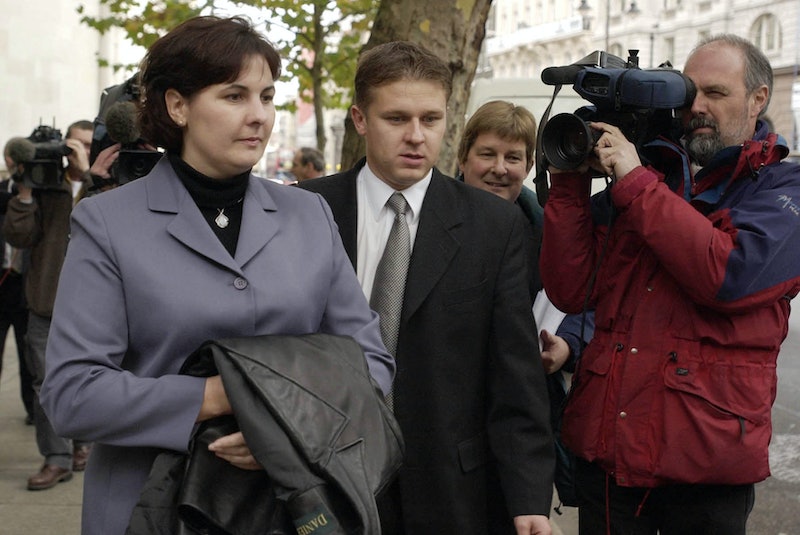 The tragic tale of an infamous 1985 killing spree is the subject of ITV's latest TV drama, White House Farm. Based on true events, the series revisits a murder that shocked the nation, in which five members of the same family lost their lives. At the heart of the investigation was Julie Mugford — the former-girlfriend of Jeremy Bamber, the man who was eventually found guilty of the murders in question. But where is Julie Mugford now?

Well, shortly after the conclusion of Jeremy Bamber's murder trial, Mugford went on to sell her story to the News Of The World, and as the Mirror reports, bagged herself a hefty £250,000 deal. Later in life, Julie married and moved away to Winnipeg, Canada, where she changed her name. Since moving from the UK, Mugford has worked as a teacher, a vice principal at a primary school, and as a manager in the Winnipeg Schools Division, according to the Mirror.

Julie was first thrust into the spotlight after the infamous White House Farm murders, which occurred on the night of August 6, 1985. The five victims were all part of the same family, and police initially concluded that a mentally-ill family member had carried out the shootings before killing herself. However, when new evidence emerged, the investigation took a dramatic turn, and Jeremy Bamber was eventually found guilty of murdering his adoptive parents, his sister, and two nephews.

According to iNews, Julie Mugford was dating Bamber at the time of the murders, and was initially very supportive of her then-boyfriend. However, the pair split shortly after the killings took place, and Mugford later became a key-witness after testifying against Bamber in court. In a statement to police, Julie alleged he had previously bragged about wanting to murder his family in order to inherit the family's hefty fortune. The statement was used as evidence in the case against her ex-boyfriend, and on October 1, 1986, Jeremy Bamber was found guilty of all five murders, and sentenced to life in prison.

As the Radio Times reports, the role of Julie Mugford is portrayed by Raised By Wolves star Alexa Davies in ITV's White House Farm, which takes viewers on a journey into one of Britain's most shocking crimes. The series continues on Wednesdays at 9 p.m. on ITV1, and I'm really looking forward to seeing how the rest of this true-crime story plays out.

More like this
'Line Of Duty’s Jed Mercurio Has A New Crime Drama In The Works
By El Hunt
After The Bling Ring, Nick Prugo Was Embroiled In Another Scandal
By Arya Roshanian
UK Audiences Will Soon Be Able To Watch 'The Bear'
By Frances Stewart
'Line Of Duty' Fans Might Recognise These 'Bloodlands' S2 Filming Locations
By Sophie McEvoy
Get The Very Best Of Bustle/UK