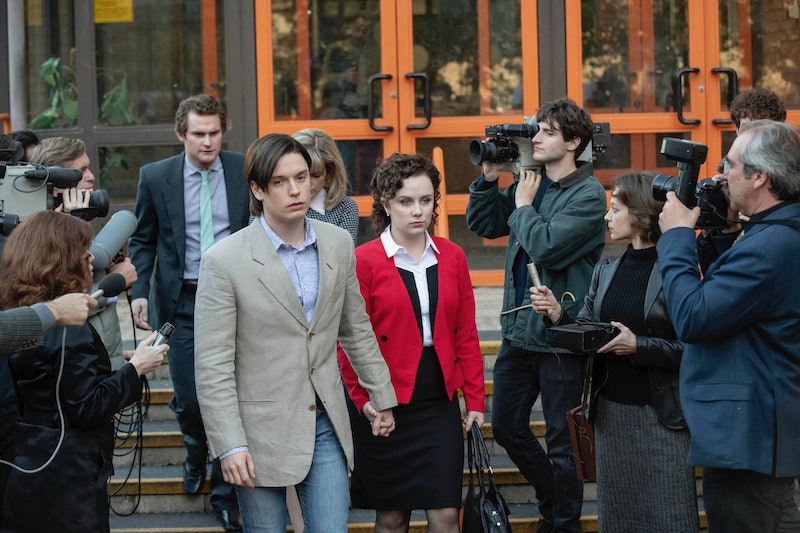 During the summer of 1985, five members of the same family were brutally killed in an Essex farmhouse, and the story behind these horrific murders is about to be retold in ITV's newest crime-drama, White House Farm. The six-part series will provide viewers harrowing details of this shocking case, and stars the likes of Line of Duty's Stephen Graham and The Bye Bye Man's Cressida Bonas. But where was White House Farm filmed? Here's everything you need to know about the ITV factual drama.

As the Radio Times reports, the series is based on a true story, and set within the county of Essex in Southeast England. According to Essex Live, production on the drama kicked off back in October 2018 in Chelmsford village, and went on to film at The Chequers Inn pub in Roxwell Village, and outside Bourtree Cottage — where accused murderer Jeremy Bamber resided at the time of the killings. The ITV series is based on the real-life White House Farm murders, which took place on the night of August 6, 1985. As the Mirror reports, the five victims were all part of the same family, and police eventually concluded that one family-member, who suffered from mental health issues, had committed the crimes before killing herself. However, a new suspect eventually emerged, and this almighty twist will be played out in ITV's retelling of the case which rocked Britain.

What promises to be a gripping true-crime story is complimented by a stellar cast, which includes Year of the Rabbit star Freddie Fox as Jeremy Bamber, Game of Thrones' Mark Addy as DS Stan Jones, The Irishman star Stephen Graham, Gentleman Jack's Gemma Whelan, Waterloo Road star Amanda Burton, and many more. As reported by the Radio Times, the ITV dramatisation was penned by Kris Mrksa and Giula Sandler, who worked alongside Colin Caffell — whose wife and two children were tragically killed in the 1985 murders.

Speaking of the new series, show-writer Mrksa described White House Farm as an "incredibly compelling true crime story," and revealed that during the drama's writing process, he wanted to ensure the series "did justice to the devastating emotional truth of what happened." Elsewhere, ITV's Head of Drama, Polly Hill, promised the crime-drama will provide "a fascinating insight" into what occurred on that fateful night, and revealed that she is "delighted" to welcome this "truly outstanding drama" to ITV.

With fascinating real-life origins and an impressive cast, this six-part tale is sure to be a highlight of the 2020 TV lineup, and you can watch White House Farm on Wednesday, January 8, at 9 p.m. on ITV1.

More like this
This First Look At 'The Gold' Shows Jack Lowden In A Whole New Light
By El Hunt and Sam Ramsden
A New Netflix Doc Will Explore The Unsolved Murder Of Jill Dando
By Sam Ramsden
Helena Bonham Carter Doesn't Think 'The Crown' “Should Carry On"
By Sam Ramsden
Twitter Is Burning As Phoebe Dynevor Reveals Daphne’s 'Bridgerton' Exit
By Sophie McEvoy
Get The Very Best Of Bustle/UK
Sign up for Bustle UK's twice-weekly newsletter, featuring the latest must-watch TV, moving personal stories, and expert advice on the hottest viral buys.