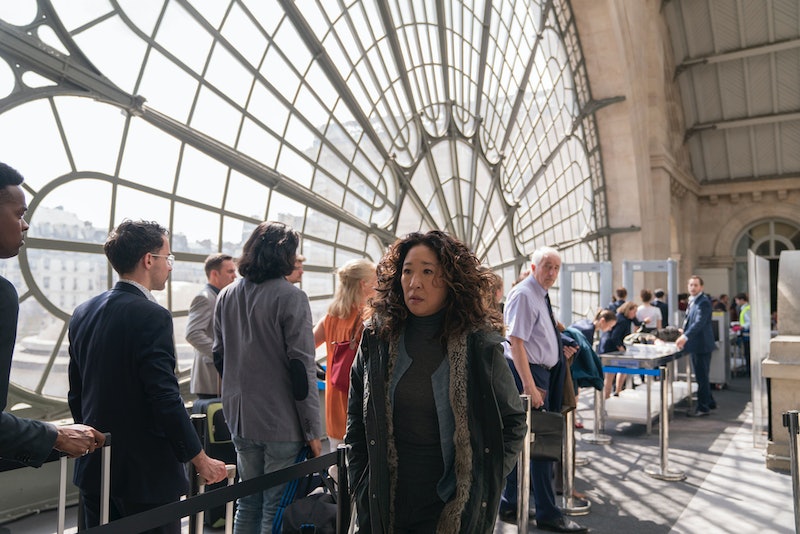 Being an assassin appears to be a pretty international affair. Well, according to what's happened thus far in the Killing Eve universe. I guess when there are multiple people to be killed and money isn't an object, then you don't have to worry about cheap flights and Airbnbs. Last season saw Villanelle flitting about Europe in fabulous dresses like the Scarlet Pimpernel. So the question is, where is season 2 of Killing Eve filmed? Are they going to be in the club again giving us all rave flashbacks?

Well it remains to be seen whether Villanelle will be hitting the club again, but it looks like this season will not disappoint, and your favourite psychopath will be hitting up some old familiar spots as well as a new place for her to reek havoc. Vogue reports that the second season was shot in London and Paris. So I guess more of the same locations from last season and lots of encroaching on each other's lives between Eve and Villanelle. Scenes were also shot in Amsterdam, and Rome which might well mean there is a new person in the neighbourhood. Could you imagine, lovely new neighbour, turns out to be a murderer. Less than ideal.

The second season of the show is definitely one of the most hotly anticipated pieces of entertainment this summer. You can keep your Game Of Thrones, I'll take Killing Eve. Advance warning that I am about to discuss spoilers from the first season.

So at the end of season one, Villanelle was very badly injured having been stabbed by her frenemy with benefits Eve. It was one of most unusual yet most intense relationships ever seen on screen. One is an uber capable, charming, psychopathic assassin, and the other, an MI5 security official hell bent on catching her. All of this dipped in a heavy dose of sexual tension. And you thought your love life was complicated, Eve confessed her feelings for Villanelle and then stabbed her straight after. Yikes.

The show is based on a series of novellas by Luke Jennings called Codename Villanelle. Phoebe Waller-Bridge, of Fleabag fame, wrote the first season script. After getting tied up with season two of Fleabag she handed the reins over to Emerald Fennell. Fennell is probably best recognised by Call The Midwife fans as lesbian nurse Patsy Mount. Or as eager The Crown fans as Camilla Parker Bowles in the upcoming new season.

Fennell spoke to the BBC about the upcoming season and explained the beautiful and bizarre complexity of Eve and Villanelle's relationship.

"It is constantly evolving, like all complicated relationships do. All of the hallmarks from last season are still there: the obsession, the fascination and inability to leave it alone, even though it is compromising. What we see this year is that the women are bonded in a sadomasochistic way by an act of extraordinary violence. It has changed their lives massively in different ways and it is now more dangerous than it was".