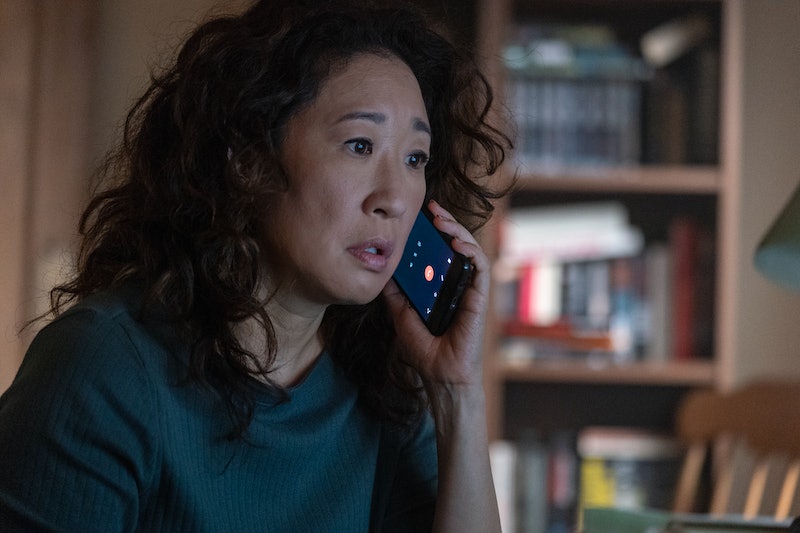 Usually, stabbing someone ends a relationship — but the relationship between Eve (Sandra Oh) and Villanelle (Jodie Comer) is only getting juicier in Season 2 of Killing Eve. Eve's spontaneous decision to stab Villanelle at the end of that intense first season finale seemed to destroy whatever complicated connection existed between the two women; Villanelle trying to shoot Eve immediately after also seemed to signal the dynamic had changed between the spy and the assassin targeting her. But the Killing Eve stars and showrunner are here to tell you that things are only getting more complicated and thrilling from here.

Season 2 of BBC America's hit drama (premiering Sunday, April 7) picks up just 30 seconds after the events of the Season 1 finale, and Oh gleefully tells Bustle that everything is about to get a whole lot "sexier."

Killing Eve executive producer Sally Woodward Gentle promises that they "didn't change that much" from Season 1's winning formula — fans will still be getting plenty of what they want: more of Eve and Villanelle's impossible-to-define relationship. "They are more intimate with each other. They know each other better," Woodward Gentle says. "Villanelle is definitely not even under the illusion: she realizes that she's gotten to Eve and that shifts things."

As for how long we'll have to wait until we see Eve and Villanelle reunite after that bloody confrontation? "Ha! I'm not going to tell you," Woodward Gentle says with a laugh. "I suppose the question is do they really want to see each other again? I suspect that Eve is so bewitched by Villanelle still that she won't be able to stop herself searching for her. Her ego is massively flattered by the attention of this extraordinary being that how do you really live if that's not in your life anymore? One should assume that they will seek each other out."

She pauses, then adds, "There are some near misses, let's put it that way, and then they will find each other again."

When the two women do eventually reunite, things will have changed drastically. For one, Villanelle has seen what Eve is capable of, and now both women know the stakes are raised.

"Can you tame a psychopath? That's definitely worth looking at."

Comer thinks that Villanelle's reaction to Eve stabbing her is one of the most fascinating parts of how Season 2 begins.

"I think it means something to Villanelle entirely different than what it does to Eve," Comer says with a smile. The big question of Season 2, she adds, is whether their "impossible relationship" can work. After all, "the two women are in very different places than where they were in Season 1 for sure."

Aside from what Eve's stabbing means for her relationship with Villanelle, that act also shakes up Eve's worldview in a way she didn't anticipate.

"In a normal world, Eve stabbed Villanelle, there should be consequences for that," Woodward Gentle says. "And if she discovers that actually there are no consequences, what does that do for you? Does Eve carry that guilt around with her? Does she feel like what she did needs to mean something, that she's got to prove that she's a good person? You'll also see, does Eve feel like she's got a special relationship with Villanelle that nobody else has got? Can you tame a psychopath? That's definitely worth looking at."

Killling Eve captured a rare kind of magic in its first season, as viewers couldn't quite nail down what drew Eve, a government agent hunting Villanelle, a vicious assassin, together in an almost loving and at times sexual manner. Eve and Villanelle don't quite understand it themselves, either.

"Villanelle seriously is obsessed with [Eve] in a way that only a psychopath can be. They lock on to somebody and they're the only person that matters to them in their life," Woodward Gentle says. "It can, as quickly, flip onto somebody else. That's an interesting thing to see."

But Eve's obsession with Villanelle is equally compelling. Eve always thought she might be brilliant, Woodward Gentle says, but she was surrounded by people who constantly denied that fact. "And then Villanelle appears and ignites something in her that she thought was never going to be there again," she says. "Once you've felt that, it's addictive. She'll constantly keep looking for that." And as long as she does, Killing Eve fans will be thrilled.