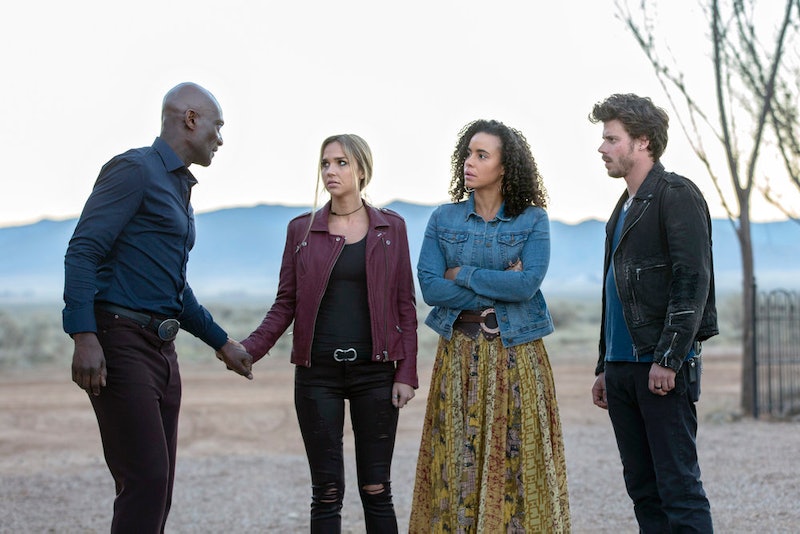 After just two episodes, I'm pretty sure I want to move to Midnight, Texas. Forget the looming demon presence — the fictional town is full of lovable weirdos and it's scenic to boot. The town doesn't exist in real life, of course, so where is Midnight, Texas filmed? The supernatural NBC series is shot in a somewhat secluded location with some seriously gorgeous sunsets.

Season 1 of Midnight, Texas was shot in Albuquerque, New Mexico at Albuquerque Studios — which is most famous for Breaking Bad and Better Call Saul, but has also housed productions such as Logan, Preacher, The Avengers, and The Lone Ranger. The Midnight, Texas pilot was partially filmed in Las Vegas, Nevada as well, according to The Albuquerque Journal.

While it's not Texas, the Southwestern setting of Albuquerque bled into the aesthetic and the tone of the series. "The sunsets and sunrises here are insane," actor Sarah Ramos told reporters at a set visit earlier in 2017. "That's something you see in the show." Midnight, Texas is "supposed to be about this locale that's so remote and really special," she says, and that feeling is matched by the filming location.

"Being in the desert," says Parisa Fitz-Henley, who plays Fiji, "you realize how at the mercy of your environment you are." The altitude is different there, and the sky seems to go on for days.

The cast basically moved to New Mexico for a couple of months. They told journalists who visited the set that they'd hung out with each other more after hours more than they would have on another series. Local flavor also made its way into the show. Most of Fiji's rings are made in Albuquerque, for example.

It's awesome that Midnight, Texas got to film in a setting that matches the show. Not everything you watch is made in Los Angeles or New York. Some shows go out to New Orleans, others to Atlanta or Vancouver. Albuquerque Studios is relatively new on the scene, and it's a perfect fit for both this show and those that came before it, for totally different reasons.

Plus, New Mexico is totally available to visit. You might not run into any were-tigers, witches, or vampires on your trip, but the magic of Midnight, Texas will still be in the atmosphere.