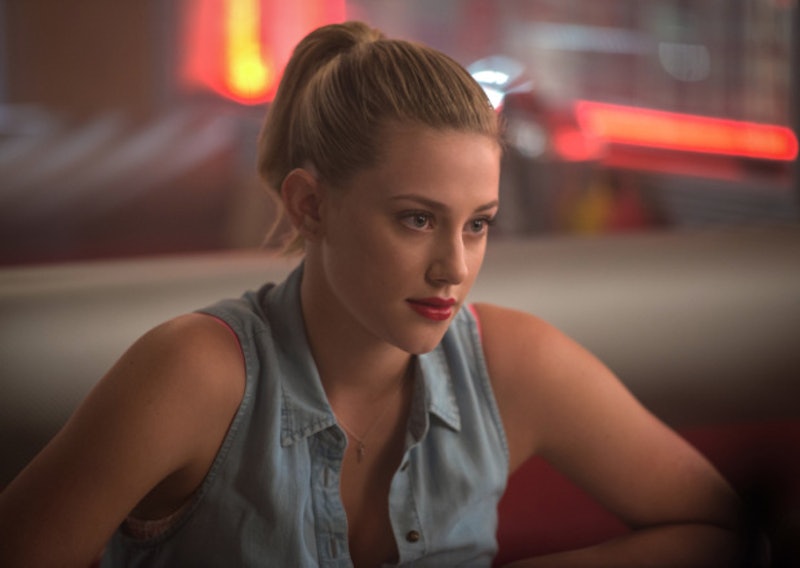 Chief among Riverdale's tangled web of mysteries is who murdered Jason Blossom, the affluent, porcelain-skinned teen whose death has been haunting Archie's small town home since episode one. Halfway through the season, we're no closer to identifying his killer than when the show premiered, but if there's one person that could hold the key to unmasking his assassin, its Polly Cooper, Betty's sister and Jason's onetime flame. But where is Polly on Riverdale, anyway?

In the March 2 episode, "Faster, Pussycats! Kill! Kill!" we finally get to hear from the eldest Cooper girl. Betty and Jughead track her down at Sisters of Quiet Mercy, a home for troubled youths where her parents sent her after an alleged suicide attempt. Betty is stunned to find that not only is Polly pregnant with Jason's baby, she doesn't seem to know that he's dead. She tells Betty that they had planned to run away together, but their parents, who'd long had a vendetta against the Blossoms, found out and shipped her off to the group home where Betty finds her. Before the sisters can get into much detail, their mom, Alice Cooper, shows up to tear the two apart, and when Betty returns later on, she discovers Polly has disappeared.

Because Polly and Jason's story line wasn't present in the comics Riverdale is adapted from, there aren't many spoilers to pull from in terms of where she could have gone. Still, there are some guesses to be made. Theory one: Polly escaped. It was clear from Betty's visit that Polly was desperate to get out of Quiet Mercy, and finding out that Jason is dead may have rattled her enough to make a run for it. The only bump in that scenario is that if it were that easy to break out, why didn't Polly do it sooner?

That brings us to the second theory: whoever murdered Jason came back to kidnap Polly. Obviously the killer wants to keep their crime a secret, and while Polly may not have been a concern when she was locked away at an undisclosed location, they may have seen her as a greater threat once Betty showed up and started digging around for answers. Or, even more likely, they didn't know where she was until Betty led them to her.

Based on the state of Polly's room, this seems to be the more probable explanation. Yes, in the world of Riverdale, kidnapping is more plausible than a runaway teen. But Polly's window was broken, and it looked like she had left in a rush. If she were the one doing the escaping, you'd think she would have done a better job of covering her tracks. Plus, Jason was tied up in the seedy underbelly of Riverdale, and could have inadvertently put a mark on Polly. Trev told Betty Jason had begun dealing drugs and selling his possessions after breaking up with Polly — a fact that's corroborated when Betty and Jughead search his abandoned car and find a bag of drugs. Whoever's behind Jason's murder is dangerous, and they'd probably go to any lengths to throw the cops off track, including kidnapping a young, expecting mother.

In any case, Riverdale has done well to keep its mysteries in tact, so it will probably be a while before we get any answers about Polly. In the meantime, Betty and Jughead will have to solve this one on their own.