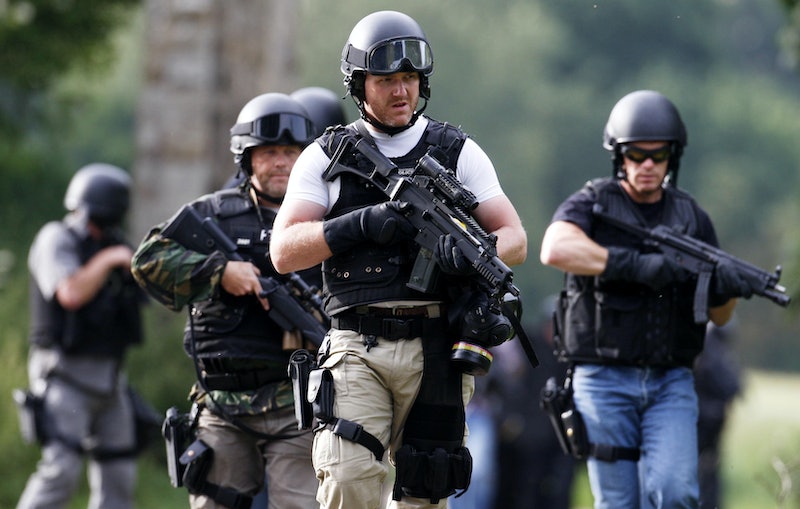 ITV's newest true-crime documentary will delve deep into Raoul Moat's crimes a decade after his shocking crimes rocked the nation. Manhunt: The Raoul Moat Story will explore the signifiant impact of the case, and also revisit public and police reaction to the tragedy as it unfolded back in July 2010. But where is Raoul Moat now?

As the BBC reports, Raoul Moat shot and killed himself following a six-hour standoff with police on Saturday, July 10, 2010. The fatal incident took place during a nationwide manhunt for the killer, which first began after Moat shot his ex-girlfriend Samantha Stobbart and her partner Chris Brown — the latter of whom sadly died.

Just hours later, Moat also opened fire at motor patrol officer PC David Rathband, who was working on duty close to Newcastle at the time. Rathband was left in a "critical" condition, and as the Guardian reports, suffered life-changing injuries.

Following the shootings, Moat went on the run from police. However, after rapid investigation and multiple connected arrests, local authorities located the gunman close to the National Trust's Cragside Estate in Rothbury. After hours of intense negotiation between both parties, during which police officers strived "to persuade Moat to give himself up peacefully," the wanted gunman eventually turned the weapon on himself.

With journalist Nicky Campbell at the helm, Manhunt: The Raoul Moat Story aims to shed new light on the tragic events which gripped the nation. Using rare archive footage and exclusive interviews with those closest to the case — including police officers, family members, witnesses, and more — viewers will discover exactly how Raoul Moat was eventually caught out, and gain unique insight into the mindset of a killer on the run.

"With this landmark documentary, ITV aims to provide an important and vivid insight into these tragic events," said ITV Controller of Current Affairs, Tom Giles.

Speaking of the upcoming doc, Giles also revealed the true-crime special will "delve into the investigation of the case and the actions of Moat in forensic detail," before concluding that viewers will be immersed in the manhunt, by "exploring how Moat escaped officers' clutches for a week."

Manhunt: The Raoul Moat Story is coming to ITV later this year.

More like this
A New Netflix Doc Will Explore The Unsolved Murder Of Jill Dando
By Sam Ramsden
'The Catch' Revisits A Famed Irish Filming Spot From 'The Tudors'
By Darshita Goyal
Rachel Nickell’s Son Wants The Police To Take Accountability Over Errors
By El Hunt
6 'Happy Valley' Easter Eggs You May Have Missed
By Sophie McEvoy
Get The Very Best Of Bustle/UK
Sign up for Bustle UK's twice-weekly newsletter, featuring the latest must-watch TV, moving personal stories, and expert advice on the hottest viral buys.