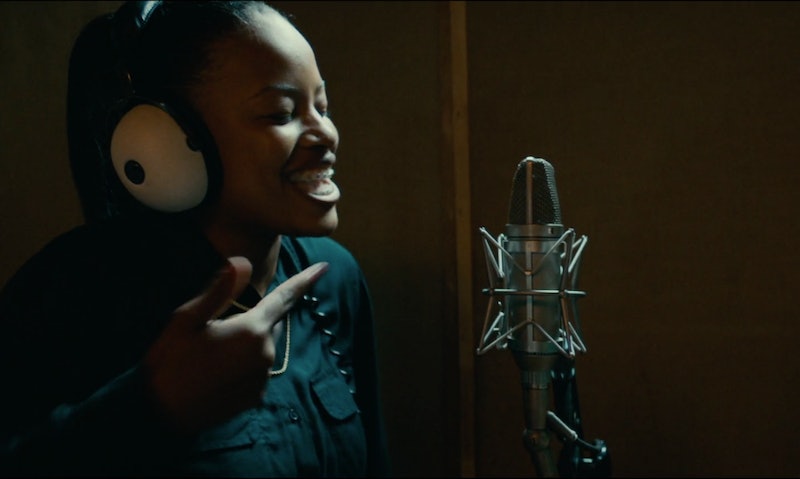 Over three decades ago, a 14-year-old girl from Queens stepped up to the mic and put one of early rap's most infamous diss tracks to tape. Roxanne Shante's "Roxanne's Revenge" took the scene by storm, putting the teenager in the spotlight as one of rap's first popular female MCs. Two albums and several tours later, Shante largely stepped away from the music industry at only 25 years old. So why did she leave a scene she helped create, and just where is Roxanne Shante now? Roxanne, Roxanne, a new documentary on Netflix, dramatizes the toll the rap scene took on the teenager, including abuse and neglect within the industry.

In 1984, producer Marley Marl and radio DJ Mr. Magic were standing outside a Queensbridge building known as "The Bridge", a housing project that was the home of talented rappers like Nas and Mobb Deep. As the movie depicts, Marl and Magic were complaining about hip hop group U.T.F.O, which had recently released a track slamming a woman who turned them down called "Roxanne, Roxanne". Shante, then known as Lolita Shante Gooden, had been rapping since age 13, winning rap battles all over NYC against men twice her age. She had the verve to walk up to Marl and Magic and propose she rhyme a U.T.F.O. response track.

Her song "Roxanne's Revenge" wasn't just her breakout hit, it became her identity. She changed her name to Roxanne Shante, the moniker she still goes by today. And the song spawned an unprecedented number of responses, with Shante, four other women claiming to be the original Roxanne, and a slew of other artists recording tracks, diss tracks, responses, and songs from the point of view of nearly every member of Roxanne's family (including her baby). Summed up as the Roxanne Wars, they inspired well over 50 songs in under two years.

In a March 2018 interview with Pitchfork, Shante said she never received a royalty check, something she's made her peace with, and even sees an upside of. "A majority of the artists that I knew who did receive money all started to get high," said Shante. "I never got a check, so I couldn’t afford to get high... I barely had enough to just make sure everybody was good and survived on."

Roxanne, Roxanne shows that money was only one of Shante's problems. Her mother began drinking heavily after getting swindled out of $20,000 she'd set aside to move the family to New Jersey. She and Shante had a contentious relationship, especially over fears the teenager would be exploited by the people around her. It wasn't unfounded; by age 15, the film depicts, Shante was in an abusive relationship with her son's father.

Shante also didn't receive credit where she was due, career-wise. In an interview with The Muse, the rapper noted that many others took credit for her rhymes, including her mentor Marley Marl. "How are 12 other people given credit for writing this when it’s a freestyle and [Marley Marl]’s on the beatbox?" Shante asked. "It was a time when I didn’t know anything about paperwork. I didn’t know that you’re supposed to register things with ASCAP or how you’re supposed to be a writer." The insult almost extended to this day, when VH1's Hip Hop Honors dedicated its 2016 ceremony to women in rap, and neglected to invite the first female rapper with a hit single until the very last minute.

After stepping back from the music industry, Shante continued mentoring young women MCs, eventually founding Mind Over Matter, a nonprofit to help troubled teenagers, with her new husband. She works as a Court Appointed Special Advocate, speaking on behalf of foster children who don't have a representative. She still makes occasional live appearances, and is extremely happy to share her turbulent life with the world if it will help others. Speaking with Interview, Shante said, We’re blessed and we’re here. When people see me I want them to be like, “Damn, she really survived that.” Anyone who sees Roxanne Roxanne will likely think just that.

More like this
Lisa Marie Presley Reviewed Baz Luhrmann’s ‘Elvis’ Movie On Twitter
By Grace Wehniainen
'Dirty Dancing's Jennifer Grey Wants Harry Styles To Be The Sequel’s Love Interest
By Grace Wehniainen
Sandra Bullock, Girlboss Extraordinaire
By Matt Harkins & Viviana Olen
Where Is Dr. Cline Now?
By Morgan Leigh Davies
Get Even More From Bustle — Sign Up For The Newsletter