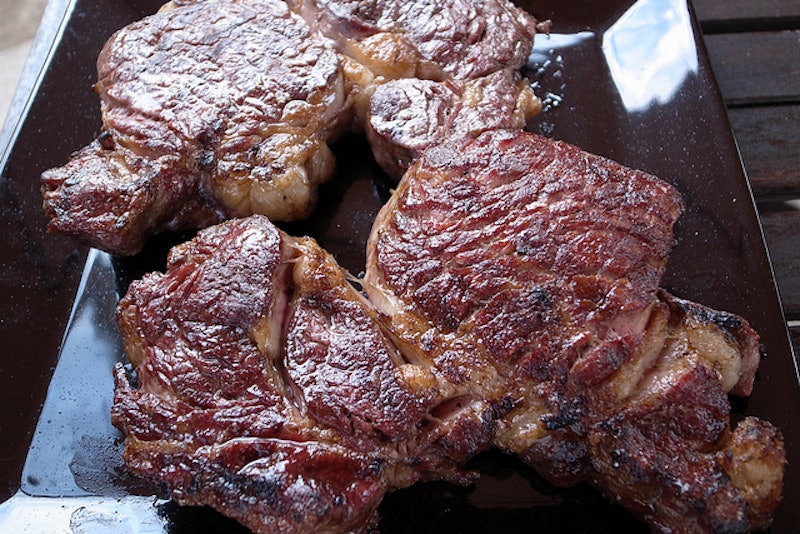 As 2017 adopts its first major meme of the year, many are wondering how, exactly, they can track down the one and true Salt Bae. Where is Salt Bae's restaurant? What does Salt Bae like to do in his free time? Where does Salt Bae buy all of his vests and those tiny, circular glasses? All good questions. Let's find some answers — particularly to the one about where his restaurant is, and whether you can actually get to it.

Turkish chef Nusret Gökçe, lovingly dubbed Salt Baes by the Twitterverse, began his meteoric rise to fame on Jan. 7, when he posted a video of himself flamboyantly cutting an "Ottoman steak." The 36-second video, available on Gökçe's Instagram page, immediately went viral, garnering over 300,000 comments and nearly 6 million views (not so surprising, I guess, considering he already had around 1 million followers). Though his steak cutting skills are impressive, it was Gökçe's salting skills that stole the world's heart and turned him into an instant meme. He sprinkles those crystals like they're fairy dust, like they're magic, like he's about to turn that meat into, I don't know, something better than meat. I'm not being hyperbolic; that's literally what comes to mind. ‌

When he's not wowing the world with his salting abilities, Gökçe is the owner of five steakhouses and two burger restaurants throughout Turkey and Dubai, all lovingly named Nusr-Et (after himself). Since opening his first location in 2010, Gökçe has become somewhat of a favorite among Turkish celebrities — which is hardly surprising, given that he dresses like an early aughts Johnny Depp and curates choreographed meat-cutting moments.

If you're in the neighborhood (you know, casually or whatever), and want to check out one of his spots, you can head to one of three locations in Istanbul, Turkey, one in Ankara, one in Bodrum, and one at the D-Maris Hotel in Hisarönü. If you're ever at the Restaurant Village Four Seasons Resort in Dubai, you can snag something off Nusr-Et's meat-heavy menu as well.

As of now, Gökçe does not appear to have plans to expand outside of his home country, but who knows. It's 2017 — anything is possible.

More like this
I Tried The $20 TikTok Viral Oishii Strawberries — Here's What I Thought
By Sophie Hanson
On TikTok, A ‘Snackle Box’ Is The Best Way To Pack Charcuterie On-The-Go
By Meguire Hennes
The Best Memes & Tweets About The Discontinuation Of The Choco Taco
By Alexis Morillo
These TikTok-Viral Kitchen Gadgets Will Make Your Life So Much Easier
By Alexis Morillo
Get Even More From Bustle — Sign Up For The Newsletter