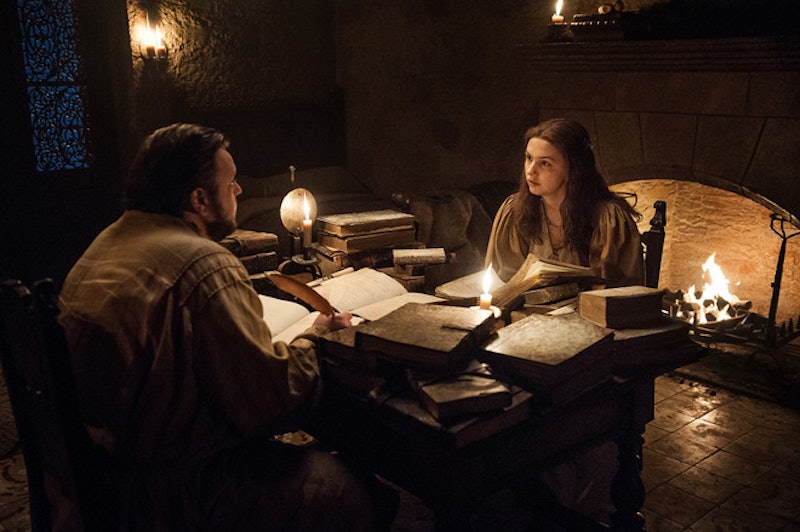 Raise your hand if you were done with Sam wasting away at the Citadel on Game of Thrones. Don't get me wrong, it was necessary and he learned a whole hell of a lot during his time in that place, but I feel like Sam has a lot more to offer this world. His intelligence will be vital, possibly for everyone's survival. So, when Sam left the Citadel in the dead of night with Gilly and little Sam — many fans cheered that his story will finally get a bit more interesting. And, just where is Sam going now on Game of Thrones?

Honestly, there isn't a definite answer for this just yet but I can attempt to speculate on where Sam is headed, based on the information that he has under his belt currently. In Sunday's episode, Sam overheard the Archmaesters talking about Bran being the Three-Eyed Raven and having visions and all that business. So, now he knows that Bran is alive and living that clairvoyant life. The next time we saw Sam, he was half-listening to Gilly giving him a history lesson that was wildly important. Gilly basically confirmed that Jon Snow is not a bastard, because she was reading a passage from a book that seemed to say Rhaegar's marriage to Lyanna Stark was legitimate. This also makes Jon the rightful heir to the Iron Throne. Of course, it didn't seem like Sam was listening, but he still got frustrated with his inability to be proactive at the Citadel and he packed his little family up and left.

When Sam was leaving, Gilly asked him whether he was really sure of the decision. Sam responded, "I'm tired of reading about the achievements of better men." Does this sound familiar? Well it should because it is precisely what his father said to him last season when he announced his intentions to go to the Citadel to become a Maester. Does this mean that Sam is headed back home, where he will discover that he is the only surviving heir of the Tarly clan? His father and brother were roasted alive by Drogon after failing to bend the knee to Daenerys.

If he isn't headed home, then I think Sam is going to Winterfell to find Bran and possibly Jon. Now that he knows Bran is the Three-Eyed Raven, or at least that he is having visions, he may want to find out some information from him to better put together the holes in his knowledge of Westerosi history. He could be the one to tell Jon about his true parentage (or Gilly, technically).

Wherever Sam is off to, I just hope he makes it. Things are moving pretty quickly now on Game of Thrones and no one is safe from Winter's wrath.