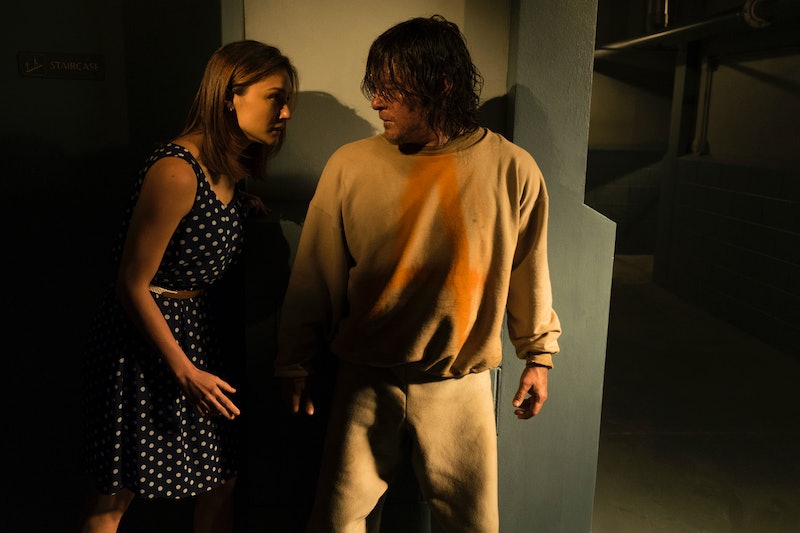 Sunday's episode of The Walking Dead provided further insight into Negan's dystopian dictatorship at the Sanctuary, but one of the Saviors was conspicuously missing. Where is Sherry on The Walking Dead? Dwight told Negan that he killed her, but that isn't the whole story.

Not only did Dwight not murder his own former wife, but he condemned a man to death to assuage himself of blame for Daryl's escape. While it's been a while since we saw Sherry on The Walking Dead, in the timeline of the show she recently helped Daryl escape his "Easy Street" prison cell. After that happened, she herself made a run for it.

Negan sent Dwight to find her, and he knew just where to look — their old house in the woods. He came prepared with beer and pencils, I think prepared to run away with her again. However, Sherry wasn't there. She left a note, explaining why she helped Daryl escape — he reminded her of Dwight, before Dwight got in too deep with the Saviors and lost too much of his humanity. She didn't want that to happen to Daryl too. Considering that Dwight is basically obsessed with Daryl, this cut deep.

Dwight returns and tells Negan that Sherry was destroyed by walkers, and with his help. He tells him that Sherry confessed to collaborating with the Saviors' doctor (not true) to help Daryl escape, which is fine when Negan kills him because they have another doctor (not true) in Eugene. Without Sherry, Dwight re-adopted the worst aspects of his Savior persona, and assured Negan that he had no regrets about killing his wife (also not true).

So, where did Sherry go? The smartest choice would be the Kingdom, whose walls are protected from the Saviors. She'd definitely get along with Carol, who is also holding close to the humanity she has left. I don't think Sherry would stay hidden for very long at the Hilltop or Alexandria. Maybe she'll join Oceanside, or disguise herself as one of the Heapsters/Scavengers. Maybe she'll run into Heath, who also vanished into thin air. I definitely think that Dwight and Sherry's story isn't over. I'm interested in what she does next, and whether or not there is any hope for Dwight.