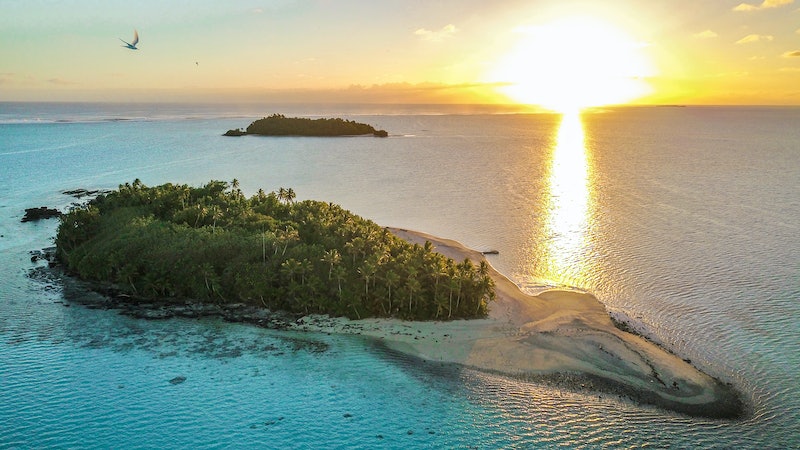 After a seven-year hiatus, the classic Channel 4 series Shipwrecked is finally making a comeback. The reality show sees two competing teams battle it out in the hopes of securing a massive cash prize, and the sun-kissed castaways reside on separate islands throughout the duration of their stay, but where is Shipwrecked filmed?

The series has taken place in a variety of locations since it's original run. Season 1, which aired in 2000, was filmed in the Cook Islands, reports TellyMix, and Digital Spy notes that season 2 took place in Fiji. Season 3 was filmed in Nuku Island near Tonga, according to a Gazette & Herald interview with one of the season's competitors. The beloved Tigers vs Sharks format was introduced in 2006, when the series returned and, for this, the two "tribes" were back in the Cook Islands, the Tab reports.

For Shipwrecked 2019, it seems producers want to take the show back to its roots, with the Tigers and Sharks taking up residence in the Cook Islands again. The two small islands used in the show are called Moturakau and Rapota, the Tab reports.

Back in May last year, an insider spoke to The Sun about the decision to bring back the much-loved reality series. Speaking to the newspaper, the insider said:

"Lots of people have fond memories of watching Shipwrecked in their youth and dreaming about joining the fun in paradise. Now Channel 4 have decided to give millennials the same experience, after Love Island proved sun-kissed hunks and beauties frolicking in a tropical setting can result in huge ratings."

As reported by Bustle, the brand new edition of the classic reality franchise is expected to follow the same Battle of Islands format that was first introduced in 2006 and was carried through until the show was axed in 2012. This format sees rival "tribes" compete to recruit new arrivals and, at the end of the season, the island with the most people is crowned victorious.

Although the cast of Shipwrecked 2019 is yet to be announced, Channel 4 has revealed that broadcaster and presenter Vick Hope will be narrating the series. Hope has said she is "chuffed" about her new role, and continued:

"I was such a fan of the show back in the day on T4, and my friends and I would be so invested in all the tribal twists and turns on Shark and Tiger Island, so it’s a real honour to get to have the first sneak peek at winter’s hottest reality show. There are some amazing characters, epic bombshells and lovely waves of nostalgia ahead.”

And Shipwrecked has the potential to launch people into stardom, with previously series featuring now-famous faces such as TV and radio presenter Sarah-Jane Crawford, reality TV star Jeff Brazier, and Celebrity Big Brother winner Stephen Bear, according to Digital Spy.

The rebooted series will begin airing a 15-episode run on Jan. 28. Until then, fans can sate their Shipwrecked appetite by taking a look at the first trailer, which shows two groups of islanders engage in a heated exchange. If this teaser is anything to go by, it looks like viewers are in for an absolute treat.