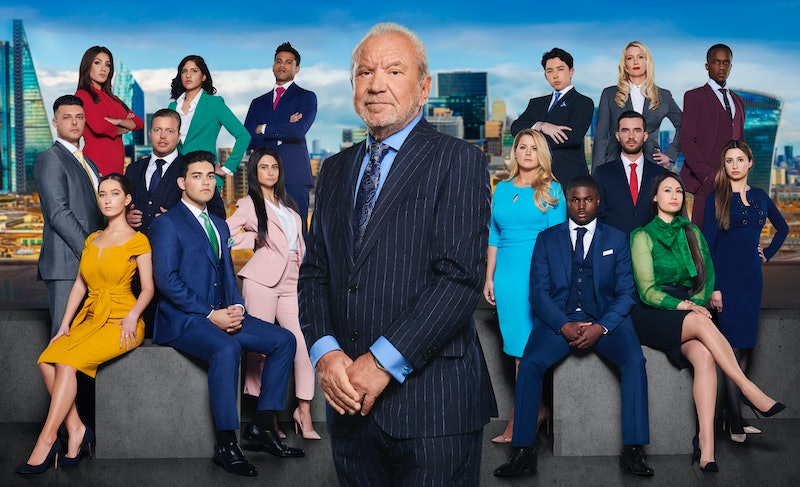 The Apprentice is back, and Lord Sugar is once again on a mission to find his newest business partner. Yes, the 15th series of the BBC reality-competition has finally arrived, and this year's contestants have a plethora of demanding challenges ahead of them — all under the watchful eye of Lord Sugar and his trusted aides. As in previous series, candidates are required to relocate to the city of London and move in with their new business rivals. But where is The Apprentice 2019 house?

Well, details of this year's Apprentice house have so far been kept under-wraps. I have reached out to the BBC for comment, and will update with any new information once it becomes available. However, as reported by the Mirror, the previous two Apprentice houses were located within London's upscale Notting Hill, so it's a safe bet that this year's contestants will be enjoying a similarly swanky London pad.

Back in 2016, The Apprentice cast-members were hosted within the London neighbourhood of Hampstead, a location favoured by several A-List residents — and in 2015, the Apprentice hopefuls occupied a plush mansion in the heart of the West End, which recently sold for a whopping £5 million. Not too shabby.

As the Radio Times reports, The Apprentice 2019 will get underway on Wednesday, October 2, at 9 p.m. on BBC One — and in addition to Lord Sugar, advisors Karren Brady and Claude Littner will be back to offer their valued expertise. The cast of the show's 15th run is made up of a bakery owner, a YouTube prankster, a former Undateables star, and more — all of whom will battle it out for a £250,000 business investment from Lord Sugar himself.

As reported by iNews, the BBC reality-competition is currently celebrating its 15th year on the air, however, the Apprentice boss is showing no signs of slowing down. Speaking to the press at the launch of the 2019 series, Lord Sugar revealed that he'd like to see the show continue on for at least another five years — meaning the series could keep going until its 20th season and beyond. He said, "We have one more series that I’m contracted to, which will be the 16th. I might do it to 20. Twenty sounds a round figure."

As reported by The Sun, the new season will be more international than ever before, and viewers can expect to see the 2019 contestants jet off to create an advertising campaign in Finland, and carry out tours in the South African capital of Cape Town — and fans of the hit BBC series don't have to miss out on a second of boardroom action, because in addition to the main show, BBC Two spin-off The Apprentice: You're Fired is also back to provide its witty take on this year's proceedings.

The Apprentice 2019 starts on Wednesday, October 2, at 9 p.m. on BBC One, and I cannot wait to see how Lord Sugar's fresh batch of contestants handle the pressure of TV's toughest competition.