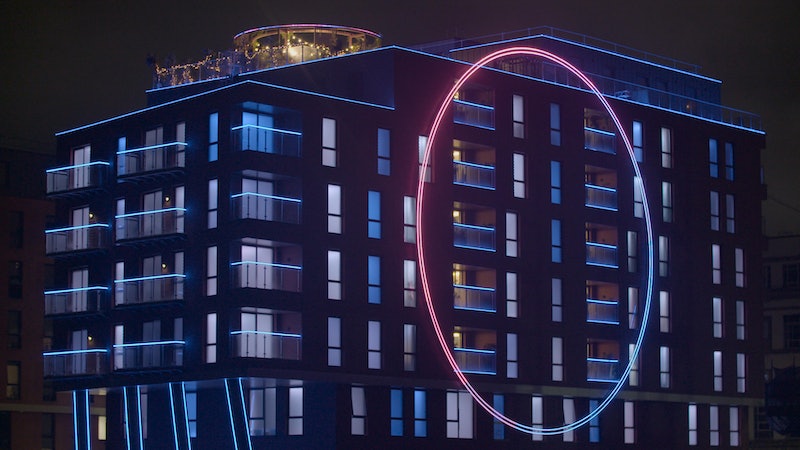 Channel 4's social media-inspired game show has returned, and once again The Circle players will show off their seriously impressive cat-fishing skills. In addition to a brand new lineup of contestants, the 2019 series also welcomes a fresh presenter, and a whole new range of apartments in which this year's players will reside. But where is The Circle filmed? Here's everything we know about the show's ambiguous location.

As reported by iNews, The Circle series 2 is filmed inside a refurbished apartment building in Salford. Despite the show's filming location being known, Channel 4 producers prefer to keep this information under-wraps for security reasons — and have in the past been known to contact local residents to ensure the location is not given away. Unsurprisingly, the building's giant neon circle pretty much gives the game away, and it didn't take long for members of the public to figure out where The Circle is being filmed.

Further details of the game show's exact location also emerged after the Manchester Evening News reported full details of the apartments being rented by The Circle's production company, Studio Lambert. However, Salford wasn't always the location of choice, and the reality show's first run took place in Hayes, West London, back in 2018.

As mentioned previously, The Circle has finally arrived back on Channel 4 for a second outing, and if you're not familiar with the concept, the game show has previously been likened to a hybrid of Big Brother and Black Mirror. According to the Radio Times, the popular reality format has been picked up for three international versions, and following his stint on the first ever series, The Circle winner Alex Hobern has opened up about the loneliness he experienced whilst filming the dystopian game show.

Hobern, who posed as his real-life girlfriend Millie whilst competing in the series, revealed that Circle players are "not allowed outside" for the majority of filming, and said that he was "completely unprepared" for the isolation he faced. During an interview with the Radio Times, Hobern said, "I was completely unprepared for the amount of isolation that there was. I didn’t bring enough things. I brought two books that I thought would be funny, so I brought George Orwell’s 1984, and I brought The Circle (Dave Eggers’ dystopian 2013 novel) in there, which completely messed me up mentally because that’s all I had."

Now, the act of cat-fishing is generally seen as a negative one, especially when it comes to social media — and The Circle's first ever winner was well aware of this, despite using a fake identity in order to bag the cash prize. Speaking to the publication about his conflicting views, Hobern revealed, "I did originally feel guilty when I won, but people were on-board with what I was doing and the humour that I was trying to bring to the game as well. I wouldn’t be so hard on myself if I had my time again. I felt I shouldn’t have won the money because I was being fake. It really hit me hard. Now it’s like, no, I should have, because I won the game."