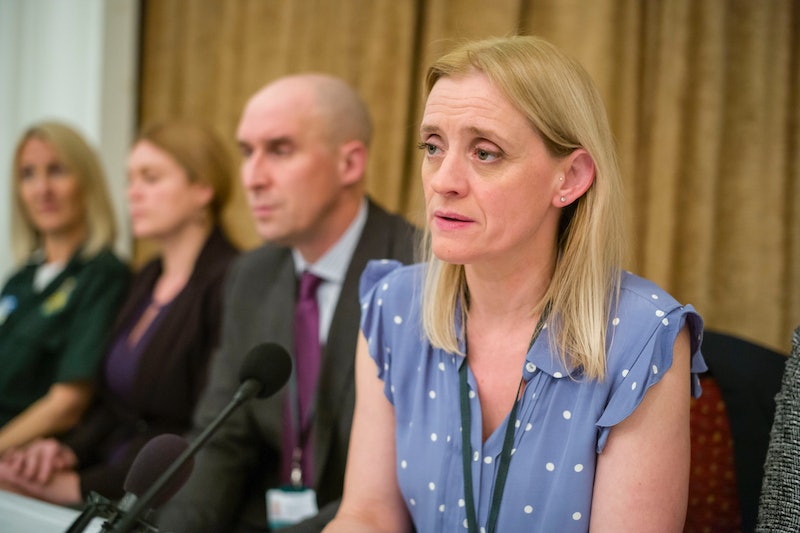 The poisoning of former Russian spy Sergei Skripal and his daughter rocked the nation back in 2018, and the devastating fallout of this fatal nerve agent attack is at the centre of BBC One's newest three-part drama, The Salisbury Poisonings. The series is based within the small English city of Salisbury, and recounts the real-life events which took place during this unprecedented national emergency. But where is The Salisbury Poisonings filmed?

As the Radio Times reports, executive producer Laurence Bowen recently shed some light on the show's filming process, revealing that various scenes were indeed shot on-location in Salisbury. However, the majority of filming took place elsewhere, primarily out of respect for local residents.

Filming commenced in October last year, wrapping up just two months later in December 2019. The Bottle Yard Studios in Bristol was used as a base during production, and filming largely took place across Bristol and the city's surrounding areas, including Malmesbury, Clevedon and Weston Super Mare.

Notable filming spots used throughout the city include Bristol's Castle Park, Bristol Cathedral, the Soundwell Centre, St Nicholas Street, and many more — the majority of which were used as replacements for real-life Salisbury locations.

"We set a lot of the early pre-poisoning stuff in Salisbury. And then we meticulously looked for matches of things," explained series director Saul Dibb. "Things needed to sort of feel real and very authentic, very truthful, but we knew there were huge sensitivities around shooting things in Salisbury. For the people of Salisbury, it’s a very recent trauma for them," he added.

As Metro reports, actor Anne-Marie Duff — who portrays public health director Tracy Daszkiewicz in the new series — also commented on The Salisbury Poisonings filming process during a recent appearance on ITV's This Morning.

"There are a few wee bits that were shot in Salisbury, because we couldn’t mock up certain areas but generally speaking we avoided it," Duff explained, adding that "it would have been a very emotive experience for people walking down the street to have seen mock ups of what happened."

As mentioned previously, the three-part BBC dramatisation is based on the 2018 poisonings of former double agent Sergei Skripal, his daughter Yulia, Detective Sergeant Nick Bailey and Amesbury resident Dawn Sturgess, the latter of whom sadly died after being exposed to the deadly nerve agent Novichok. The series retells the story of this chilling public health emergency, focusing on the strength of the local community who were faced with unimaginable horror on their doorstep.