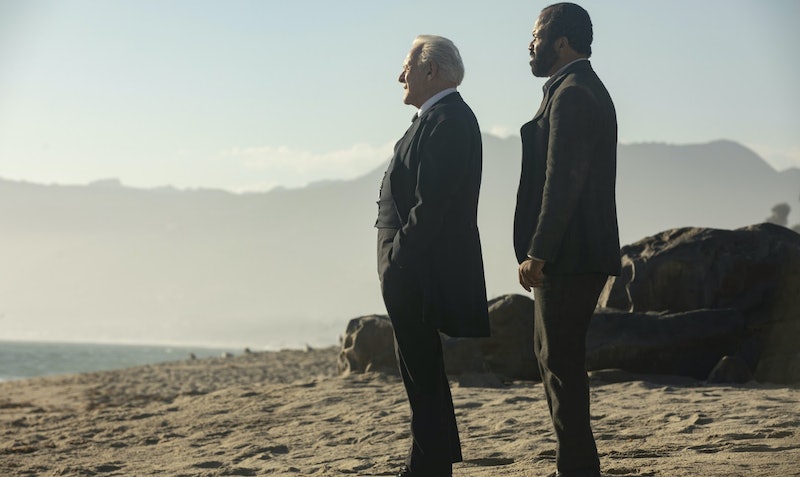 Light spoilers ahead for the premiere of Westworld Season 3. "I'm looking for a friend," Bernard (Jeffrey Wright) tells a boat driver toward the end of Westworld’s Season 3 premiere. The now-self-aware host has escaped the park and has been working at a slaughterhouse under a pseudonym. However, after an ill-fated confrontation with some of his co-workers, Bernard is now headed back into the belly of the beast. To get there, he needs a ride. He takes out a map to show the boat driver where he’s going, and when he’s asked what he’s looking for, he says “Westworld.” The location he points to — an island in the China sea — confirms fans’ long-held suspicions that Westworld is located off the coast of China.

Eagle-eyed viewers have been saying this for literal years. In April 2018, Reddit user Kurmottaja pointed out that when Maeve looks at the slip of paper revealing the location of her daughter (Park 1, Sector 15, Zone 3) in Westworld's Season 1 finale, the Finnish subtitles included specific coordinates for the Spratly Islands in the South China Sea. Reddiot jacurtis added in the same thread that when Maeve is riding the escalators down to the train in the Season 1 finale, "you hear the PA play a voice recording.... in English and then Chinese."

This is likely what Westworld co-creator Jonathan Nolan meant when he told Entertainment Weekly in 2016 that, "By the end of the first season, if you’re paying close attention, you will know where [the park] is."

Season 2 gave fans even more explicit hints. At one point, new character Karl Strand (Gustaf Skarsgård) got into an argument with someone in a military uniform who was speaking Chinese. "See this?" Strand asked him. "It's an official statement executed by your country giving Delos and consequently me authority over this entire island." He then told someone who appeared to be a translator, "Have them sign an NDA, and then please escort them off my f*cking island."

It’s still unclear how Delos managed to build an incredibly expensive, immersive park in the middle of nowhere, but it makes sense that they would choose such a nondescript location to indulge in their so-called “violent delights” and contain their sophisticated robot hosts. What Delos didn’t consider, however, is that the hosts would become sentient and try to make a break for the mainland.

In that sense, it was likely a bad idea to put the park somewhere that made it so difficult for people to communicate with anyone in the outside world. "The park is very, very vast, and you don’t rotate home often," series co-creator Lisa Joy said in the aforementioned EW interview. "You don’t have open communication where you can just pick up a phone." Somewhere like, say, the Spratly Islands.

This article was originally published on April 29, 2018