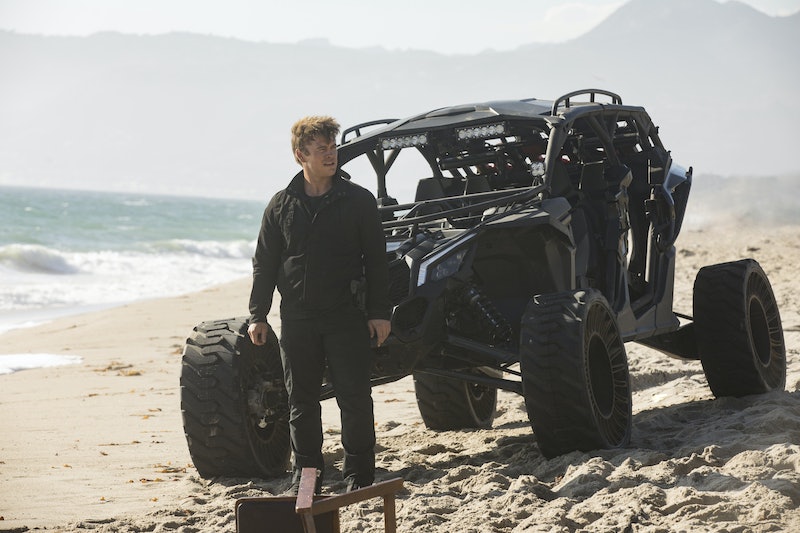 Spoilers for the Westworld Season 2 premiere. Viewers are presented with plenty of tantalizing new mysteries in the Westworld Season 2 premiere, including multiple timelines (again), a never-before-seen breed of hosts, and dozens of dead bodies floating in a lake that shouldn't have been there. But the mystery that is most likely to send the internet into a tizzy of speculation involves one very large dead cat. Where did the tiger come from on Westworld?

In the later of Season 2's dual timelines, supposedly taking place about two weeks after Dolores' murder of Ford and the ensuing massacre of the Delos board, a team of soldiers is working to secure the park from the rebellious robots. Led by Karl Strand (newcomer Gustaf Skarsgård) and tech guy Antoine Costa (Fares Fares) with Westworld veterans Bernard and Stubbs in tow, the soldiers capture and execute hosts, perform autopsies on dead androids to figure out what happened to them… and stumble across a dead tiger decaying by a lake.

Obviously the tiger is an anomaly, since there weren't any jungle cats roaming around the Wild West back in 19th century America. So why is it there? Could it be a clue about where the park is located? If it wandered in from outside, does that mean Westworld exists somewhere tigers are part of the native wildlife? Nope — the show itself quickly debunks that idea, with Stubbs saying they've "never had a stray across park borders," implying that the tiger came from another Delos park. Fans also got seeming confirmation of the popular theory that Westworld exists on an island, making it unlikely an actual live tiger could have gotten there by accident.

It's more likely that the animal is a "host" tiger… although it's admittedly hard to tell the difference, since hosts are constructed from synthetic skin and bones, meaning they decay just like humans. Maeve learned of the existence of multiple parks in the Season 1 finale — so if the tiger originated in one of them, what clue does that give us about the park it came from? It seems just as unlikely that the animal came from Shogun World, the only other park that's been identified on the show, since tigers are equally foreign to feudal Japan as they are to the American frontier.

Could the tiger have come from Roman World? That was one of the three original parks in the 1973 Westworld film, also including Medieval World. Fans of the HBO series have long speculated whether those two parks would come into play on the show at some point — and while tigers aren't exactly native to ancient Rome either, it is possible to imagine one being used there in a gladiator arena. However, showrunners Jonathan Nolan and Lisa Joy have claimed neither Roman World nor Medieval World will make an appearance on their series, preferring to create their own additional parks instead.

Now, showrunners have been known to mislead — or outright lie to — their audiences to obfuscate a future plot twist. But if fans take their word that Roman World isn't a part of the show, then the origin of the tiger remains mysterious. However, it is stated that the animal in question is specifically a Bengal tiger, which does help narrow things down. Bengal tigers can primarily be found in India… which is only going to add fuel to the fire of Redditors like user EightB1ts who believe they have already uncovered the identity of Park 2 via a series of Easter eggs: Raj World.

Given that "Raj" is the term for British rule in India — and that an animal mostly found in India just washed up from another park — could the show be about to travel to 1800s India? It certainly seems likely. But if Raj World's animals are breaking out and traveling into other parks, things may turn out to be just as chaotic there as they are in Westworld.