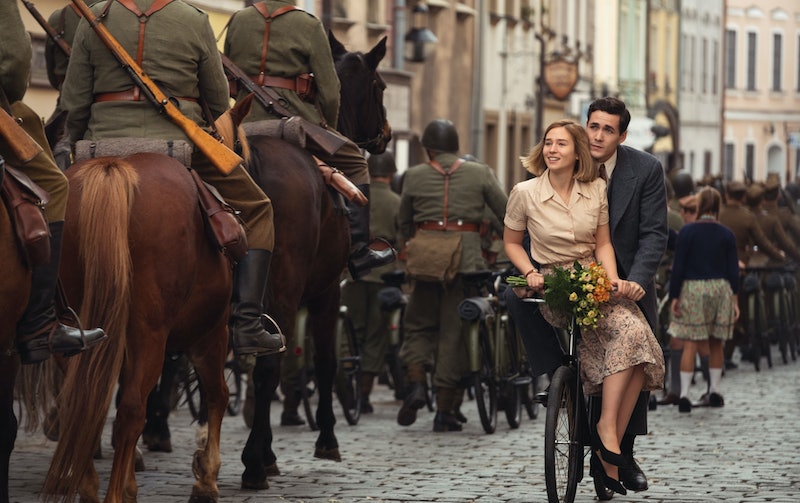 The BBC's latest foray into period drama looks to be another prime example of why they're known as the best in the biz. World On Fire is their latest production that's set to air during the mothership's coveted Sunday night 9 p.m. slot. The show is coming just in the nick of time for autumn to be making Sunday all about cosiness, hearty meals, and lashings of television. This new series is the story of World War II, told "through the intertwining fates of ordinary people," according to the BBC. But with such beautiful cinematography you might well be intrigued to know where is World On Fire filmed?

The show, which is set across Europe, was filmed in multiple locations in order to get the most realistic vision of a Europe that was at war.

According to the BBC website, the show was filmed in Prague, Manchester, London, Paris, and Berlin, along with many other locations across the UK and the rest of Europe.

One location in particular that stands out and, according to images shared by the Daily Mail, is set to be an enormously dramatic scene is that of St Anne's Beach in Lancashire. The beach served as the location for scenes recreating the Battle of Dunkirk. With a multitude of men dressed as soldiers, army vehicles, and what looked like a lot of explosions adding to the drama of the whole event.

Writer Peter Bowker, the mind behind the show, spoke about how he worked with director Adam Smith and production designer Paul Spriggs closely to work on how each location cam across on screen.

One place in particular that was important to him was Warsaw, which was tragically decimated during WWII. As Bowker explained to the BBC:

"Adam, Paul and myself talked a lot about capturing Warsaw before the war, as it was one of the most beautiful European cities. Now we think of Warsaw post-war but that helps the story because we see this beautiful city destroyed. Paul would put buildings up in front of rubble so that even when the buildings had gone, they were both in the same location so you felt invested in it visually. There’s no way you felt cheated."

He continued: "Each city, be it Manchester, Paris, Berlin and Warsaw, had a slightly different, colour palette and design. There’s a series of almost subliminal visual clues that are bedded in. One of the huge challenges of the drama is that the audiences retain in their head each family and where we are, so when we go from one story to another we’re not disorientated and lost. Paul built a landscape that allows us to do that, a kind of shorthand that we immediately recognise which city we are in."

The drama follows British translator Harry, who we meet while he's working in his nation's embassy in Warsaw and is in the grip of love's young dream with a local waitress called Kasia. When the German tanks roll in, the pair are left in a state of dismay and concern as the UK wages war with Germany. Kasia has to choose between staying and fighting for her country or fleeing with the man she loves. And he has to figure out how he will explain Kasia to the lover he left behind in Manchester before all of this began.

And if their drama isn't enough, in Berlin, American journalist Nancy, played by Helen Hunt, is desperately trying to save the lives of her neighbours the Rosslers and protect them from the Nazi rulers. While her nephew, a surgeon in Paris, refuses to leave the city despite being in grave danger.

If all of the above isn't enough of a blub warning I'll add my own. Bring the tissues, this is going to be amazing.