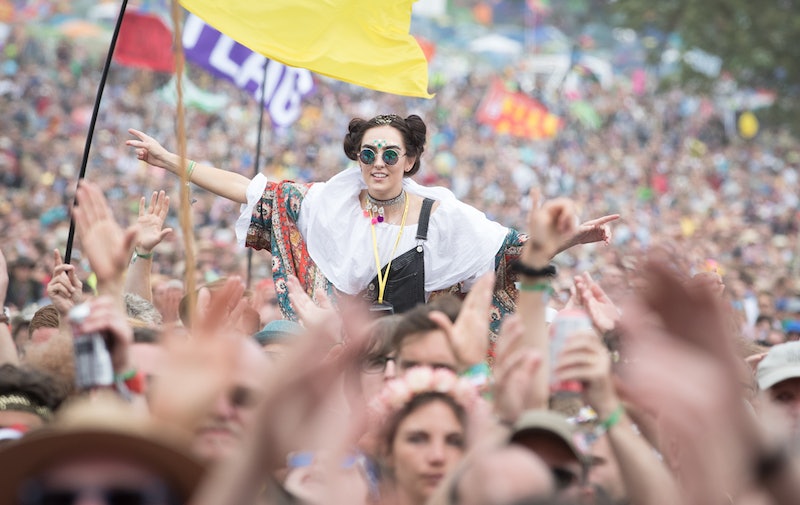 For the vast majority of the year, Worthy Farm is well, a farm. It plays host to the usual farming activities, including being home to a lot of cows. But then, as you know, almost once a year the cattle and the harvest get pushed aside in favour of one of the world's biggest and best music events. I'm talking of course about Glastonbury Festival. So, for those who going, or are just curious, where is Worthy Farm? Because Glasto feels like a whole world of its own, and it's kind of hard to believe that it's in such a cute and quaint little part of England.

According to The Sun, Worthy Farm's located in the little village of Pilot in Somerset, which Glasto co-founder reportedly inherited from his farming dad back in 1954. However, as The Guardian reported on Dec. 19, 2016, Glasto was due to move from its Worthy Farm site in 2019 in a bid to give the farm and its residents a year off. But since that's clearly not happened, you're still free to find your way to Worthy Farm for the festival this year, so if you're driving there, you'll want to enter this address into your Sat Nav: Worthy Farm, Worthy Lane, Pilton, Shepton Mallet, Somerset BA4 4BY.

As per The Telegraph's instructions, if you're travelling to the festival by train then you'll want to head towards the festival's nearest train station, which lies approximately six miles from the site. Alight at Castle Cary, and then make your way towards the free bus service which'll take you to the festival. It runs pretty frequently, with the first bus departing on Wednesday, June 24 at 7 a.m., and the last at 6 p.m. on Monday, June 29.

If you're looking to travel by coach, then you may also wish to take a look at the National Express' PDF schedule, which contains all the times and pick up points for Glastonbury-goers across the country.

Despite reports to the contrary a few years ago, the festival's organisers are quite keen to retain their farm base, you may just want to stick with your Worthy Farm travel plans in the future.

Michael's daughter and co-founder of Glastonbury Festival Emily Eavis assured regular attendees that the festival would remain on its iconic farm site for the foreseeable future, telling BBC 6 Music listeners that "Glastonbury will always be here at Worthy Farm," as Digital Spy reports. "We have just signed a 17-year contract with one of our neighbouring farmers, so it's very much as solid as it can be here at Worthy Farm," she added.

That means you shouldn't change your Glastonbury travel plans until at least 2034. That's a whole lot of years, and a whole lot of acts before the festival will even have to renew its contract, so it doesn't look like the reliably iconic festival's location will be changing anytime soon. Now all you have to is get there. See you at the Pyramid stage.