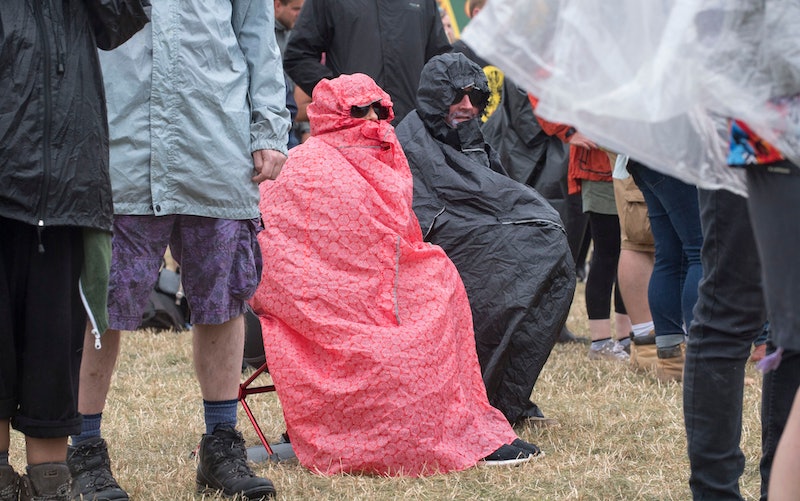 Depending on the weather, your experience at this year's Glastonbury Festival could either mean mudslides and sheltering from the heavy rain or tan lines and sheltering from the scorching sun. The UK's most famous festival always seems to invite either one of the two extremes, as it showcases British weather at its most unpredictable and inconvenient. It's just part of what makes Glasto so iconic. But now you're probably thinking about what to pack, it's time to look to those weather forecasts, and ask: will it rain at Glastonbury this year? While 2019 isn't looking terrible, it may not be exactly what you want to hear.

According to Accessorize's list of festival forecasts, there's a 31.3 percent chance of showers at 2019's Glasto. OK, that's not the worst outcome in the world, but it's certainly not the guaranteed blue skies everyone wishes for. But what are other forecasters saying?

At the moment, the MET office's predictions only extend up to Friday, June 21, but they also speak about what will generally be happening with the weather during that time. The site writes:

"The general trend for this period is currently for a more settled picture across the UK. However, there remains the potential for further areas of low pressure to bring spells of rain or showers at times with some stronger winds. Confidence is low by mid June but the most likely scenario is that overall more settled weather is likely to prevail. Temperatures will start a little below normal, slowly trending to normal of warm."

Accuweather does give some indication as to what you can expect on the week of the festival, as the site predicts sun and clouds on the first couple of days, before thunderstorms and showers are set to break out on the Friday and Saturday. They predict that the final day will see a mix of the two, with a good dash of sun and showers. A classic cocktail of Glasto weather.

Remember, that while these forecasts are subject to change, you should probably still pack a good mix of clothes suitable enough to get drenched in both sun and rain. It just wouldn't be a Great British festival without the unpredictability.

Accessorize states that the Glasto's worst ever downpour was experienced in 1985, when a torrential 13.91 mm flooded its muddy fields. That was way over the festival's estimated average of 2.07 mm. Yikes.

Oh, and a quick note: If you happen to be heading to the Lake District's Kendal Calling festival in August, then you'll definitely want to pack an anorak (or three). It tops Accessorize's list of rainfall likelihood, as they predict a 46.34 percent chance of rain. Kendal Calling is one of the country's wettest festivals. Back in 2014, the festival invited a whopping 18 mm of rain. Mud sliding, anyone?