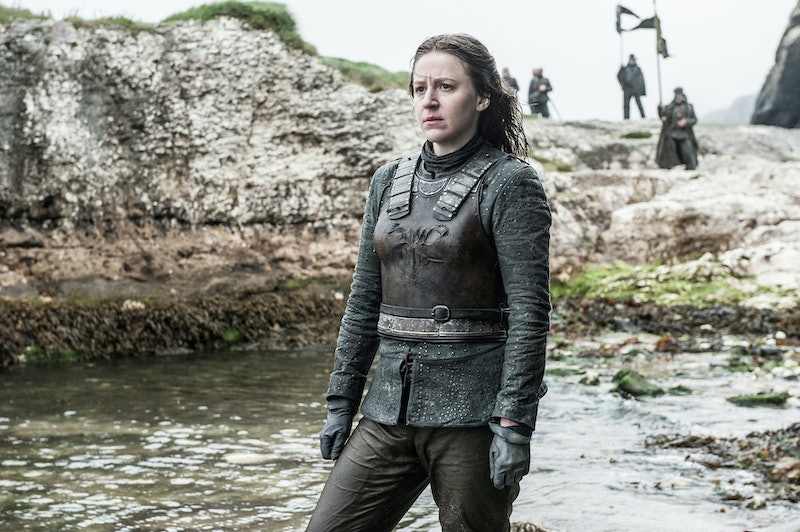 Fans thought Yara Greyjoy was as good as dead after she was captured by her sadistic uncle Euron. But her brother Theon (finally) came to her rescue during the Season 8 premiere, and now they're free to sail wherever they want. However, where Yara is going on Game of Thrones Season 8 differs from where her brother wants to head.

After breaking free, Yara and Theon began sailing away from King's Landing and toward their homeland: The Iron Islands. "Euron can't defend the Iron Islands," Yara said happily. "Not if he's in King's Landing with all his men and his ships. We can take our home back." But Theon wasn't quite on the same wavelength as his sister. "Daenerys went north," he said simply. Yara tried to reason with Theon. "Daenerys will need somewhere to retreat if they can't hold the north. Somewhere the dead can't go," she said, referencing the fact that the White Walker army can't swim to the Iron Islands. (Though they do have a dragon, so...)

However, the look on Theon's face said it all. He wanted to go north to help the Starks. It's honestly the least he can do to pay back the many debts he owes to that family. Yara seemed to understand this, and told Theon to go to Winterfell. Presumably, Theon will either take one of the ships to Winterfell or Yara will drop him off there. Either way, it seems the siblings are parting ways.

Yara has long deserved to sit on the Salt Throne in the Iron Islands, and she may be right about the northerners needing a place to shelter if the war goes badly. She will likely continue her travel to the Iron Islands and aid in the war effort from her throne — rather than going to Winterfell with Theon. She may have encouraged him to go, but their parting words seemed like a goodbye, not Yara agreeing to change course and go with him.

Additionally, everything Gemma Whelan, who plays Yara, has said hints that she's finishing out the season in the Iron Islands. She told Extra.ie that she filmed the season on the coast of Ireland. According to The Telegraph, that's where the Iron Islands are set. And sure, Winterfell films in Ireland as well, but not really on the coast.

She said it was the seaside elements that made filming challenging for her. "I kept wishing every year that the Greyjoys would go somewhere sunny," Whelan told Extra.ie. "It didn't happen, so I came back here." Back, as in back to the Iron Islands where she's already filmed? She wouldn't say "back" if it was to a new place for Yara like Winterfell, right?

She added, "Would I have liked to be filming somewhere with better weather? Of course. But there was something very special about filming [here] as well." Perhaps what made it special is that it was a homecoming for her character, and a chance for Yara to get what she'd long deserved — the opportunity to rule.

Fans will have to keep watching to see for sure, but all signs point to Yara heading back to her homeland while Theon goes to Winterfell try to make up for all the damage he's caused the Starks. Hopefully they both survive the war and can reunite in the Iron Islands once more.