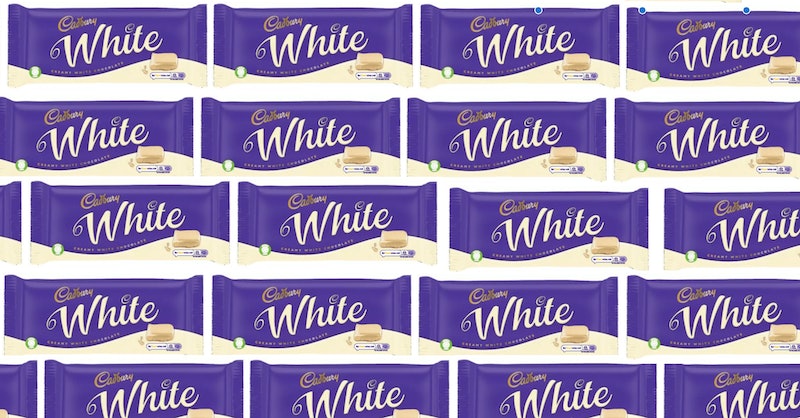 Fans of the sweeter things in life might well be hankering for a new treat. Something that takes you to whole new heights of deliciousness. Is it a bird? Is it a plane? No you guys, it's Cadbury's new white chocolate range. I'm neither joking nor telling one word of a lie. This is actually happening. Gird those loins and let me tell you where to buy it. Because as with a lot of great things in life, it sadly isn't simple.

No, that would be far too boring. Getting your hands on this new range isn't as straightforward as rolling on down to the nearest corner shop. Oh hell no. It's limited in not only how long it will be available, but also where you can purchase said treats. Because this range is to be sold exclusively at Asda. The limited edition range launches in store on Aug 29 and there's a lot more to it than just a chocolate bar. Oh hell no, that would be far too boring and not nearly inventive enough for the brand we all know and love. The new line of tasty treats will be made up of three different products to satiate even the sweetest of tooths.

So the main product in the range is the chocolate block bar which is the same as your average Cadbury's bar but in creamy white chocolate. Another Cadbury's classic that is getting flip reversed (yes, I just made a Blazin Squad reference) is their giant chocolate buttons.

And if that's not enough, my man Freddo had to get in on the act. Yes, you can look forward to enjoying Freddo white treasures from an Asda near you.

All of this is just the ticket given it's been quite a while since the family over at Cadbury's discontinued their old white chocolate bar, the Dream bar. The loss of which was a great blow to many chocolate-lovers across the country. So much so that some have even gone so far as to shop online for them, from some fairly far flung places. Guys they are still available in New Zealand, Australia, and South Africa. As The Sun reports, people are actually paying for postage from there, meaning they are spending a pretty wild £5.45 for a 200g bar.

The prices of the new range are a lot more reasonable at £2 for the block bar, £1 for the buttons, and 65p for the yummy Freddo treasures.

This year has been a busy one for Cadbury's. Earlier in 2019, they launched a Dairy Milk range which has 30 percent less sugar than their traditional bars. A spokesperson for the brand explained the health-conscious reasoning behind the new launch at the time.

"Helping chocolate-lovers to manage their sugar intake better, the new bar has been two years in the making. Our team of scientists, nutritionists and chocolatiers have been working away to achieve the much-loved Cadbury taste, with 30% less sugar, no increase in calories, and absolutely no artificial sweeteners," they said.

Which I'm fairly sure wasn't quite their motivation behind the new white chocolate range, but that doesn't mean you won't see me stocking up at my nearest Asda ASAP.