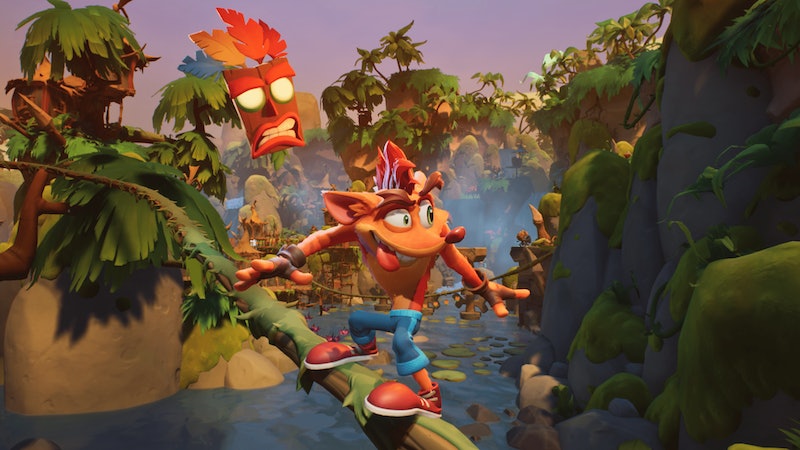 It's been more than 20 years in the making, but one of PlayStation's most recognisable characters is finally getting a new game. Aptly titled Crash Bandicoot 4: It's About Time, the game picks up immediately after 1998's Warped which saw the Crash banish his nemesis Doctor Neo Cortex and his allies to a nearby planet.

Set for release on Oct. 2, the game is currently available to pre-order digitally on PS4 and Xbox One for £59.99, which includes the "Totally Tubular Skins" for Crash and his sister Coco shown at the end of the trailer. If you're not too bothered about this additional content, you can also pre-order the physical game for £54.99 on Amazon, GAME, and Smyths.

Toys for Bob, the developer behind the recent Spyro Reignited Trilogy, have taken the reigns of this instalment providing a fresh take on the series. Integrating familiar gameplay with new aspects like platforming moves, abilities, and art style, Crash Bandicoot is finally getting the revamp fans have eagerly been waiting for.

Well, kind of. The series was revamped in 2017 by Vicarious Visions, breathing new life into the original three games with the Crash N. Sane Trilogy followed by the remaster of Crash Team Racing last year. But It's About Time marks the first game based on totally new content that follows directly on from the original trilogy.

While Crash Bandicoot 4 isn't going to be a launch title for the PS5 or Xbox Series X, which are due for release later this year, backwards compatibility will mean there's a high chance it'll run on the new systems. Back in May, Sony told PS4 developers that "any new titles submitted for certification must also be compatible" with the new console beginning July 13, per EuroGamer.

This means that any games Sony receives for testing in the middle of July "are technically forwards compatible", but it's up to the developers "to ensure this is the case."

In contrast, the Xbox Series X will let you play games from the Xbox One "at the peak performance they were originally designed for," as the Xbox blog writes, "many times even higher performance than the games saw on their original launch platform."

So either way, you'll be able to experience the latest Crash game in a whole host of ways.