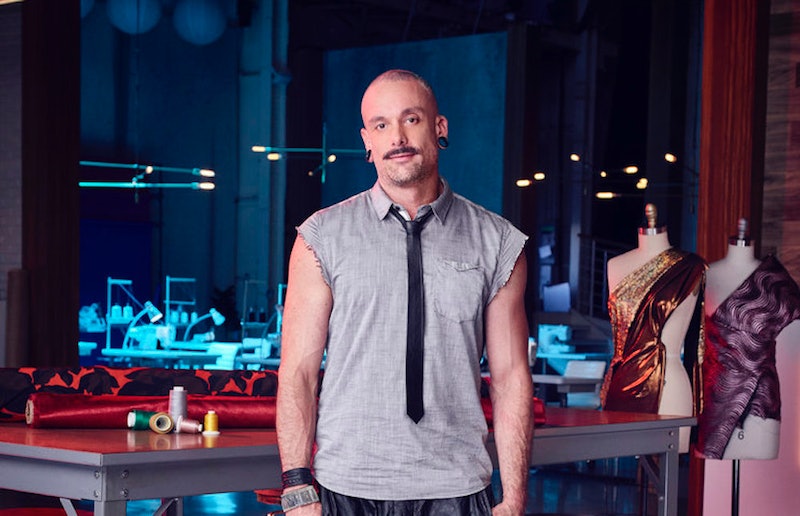 Geoffrey Mac is a serious contender to win Project Runway Season 18. He's one of four designers hoping to show at New York Fashion Week and walk away with the top prize. But even if he doesn't win, he'll certainly have boosted his name to fans everywhere by being on the show and doing so well throughout the competition. Those hoping to buy Geoffrey's Project Runway clothes are in luck, some items are already open for pre-sale.

Project Runway partnered with the fashion brand Nineteenth Amendment to produce some of the designers' looks throughout the season. Geoffrey won the overnight tie-dye challenge in Episode 10, which required the designers to tie-dye their own textiles and make a look that was couture — since tie-dye is usually seen as a pretty casual pattern. The prize for that challenge was that Nineteenth Amendment would mass produce the winner's look.

Interested fans can pre-order Geoffrey's winning green silk gown, which will then ship about 10 weeks later for $1,270. Geoffrey also won the '80s inspired challenge in Episode 5 with a super cool punk-inspired black dress. However, that was not one of the Nineteenth Amendment challenges and that dress will not be mass produced unless Geoffrey decides to do it on his own.

Fans who can't shell out over a thousand dollars for his tie-dye dress can instead shop Geoffrey's website. The stock is currently limited just to choker necklaces. There are three styles ranging from $70 to $75 in price. They're only available for pre-order at the moment and there's no set timeline for shipping.

However, following the finale of the show, Geoffrey may be able to dedicate more time to his online store and add more items — potentially including those from the show itself. His Bravo bio said he also has plans to open a brick and mortar store in his hometown of New York City. His Project Runway success can certainly be the stepping stone to that.

Creating clothing and accessories for the wider public is all new to Geoffrey. His Bravo bio said that he's mostly designed for major celebrities since getting a BFA at School of the Art Institute of Chicago. He's collaborated with Emmy-winning costume designer Zaldy and created looks for Lady Gaga (and her dancers), Britney Spears, Bjork, and Pink. Although he's been in this field for a long time, he hasn't had mainstream success with everyday buyers. If he wants that wider clientele base, then he'll certainly want to launch a bigger online store and maybe a physical store as well to give his fans the opportunity to buy and wear his looks. Keep an eye on his website to see if it expands post-finale and on his Instagram for any news. Big things could be coming from Geoffrey and fans won't want to miss a single update.