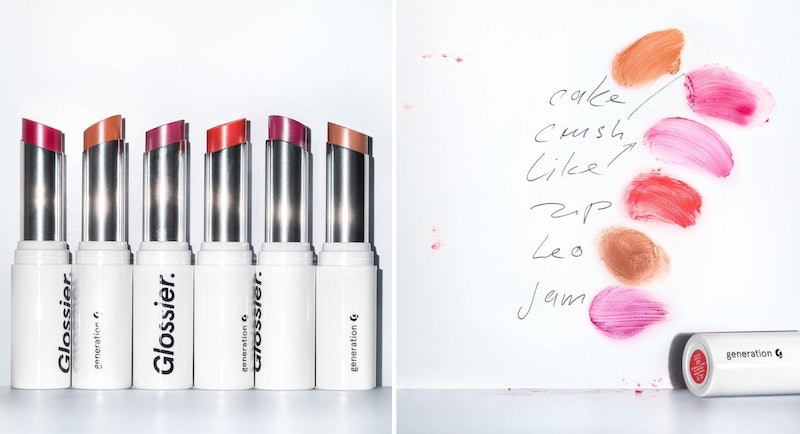 When Glossier announced they were dropping a new lippie called Generation G, everybody was initially super here for it. However, the new arrival wasn’t up to their usual standards and even the most devout Glossier stans weren’t super on board. Although some brands would have called it a day and moved onto the next product, they took the criticism on board and went back to the drawing board to reformulate the product. They’ve now released a new and improved version, so it’s worth giving it another chance. If you’re wondering where to buy Glossier Generation G lipstick in the UK, the tweaked versions are now available and you’ll want to grab a couple for yourself.

As with all Glossier products in the UK, the Generation G lipstick is only available online via the company's website as they don’t have a physical store on our shores just yet. You can buy it now and they’ve even specified in the product description that it was “reformulated on November 7, 2018”, so you know you’re getting the new takes on the lippie. The company is behind two of my new holy grail make-up products — their Lash Slick mascara and Cloud Paint blush — and while I haven't tried the new formula yet, I've ordered Zip already and fingers crossed they've learned from their first stab at the lipstick.

According to the brand's Instagram, the new formulation has a "smoother, softer, more cushion-y texture that gives you the classic diffused look." They also added that it has a "truer matte finish" and "stronger, more luxurious packaging" — the latter addressing complaints that the original go at Generation G was prone to breaking.

The matte lipstick is kind of similar to a lip stain, in the sense that it’s sheer but you can build it up in layers for a more opaque look. It’s very much in the same vein as the rest of Glossier’s products with a focus on letting your natural beauty shine through. On the site, they’ve said that they’re “lipsticks that adapt to you...so they’ll appear a bit different on everyone” and they’ve also kindly shown how each of the shades look like on models of different skin tones. (Can other beauty brands please jump on that train, please?)

The product is priced at £14, though it also comes as part of Glossier’s £35 Phase 2 Set which includes Stretch Concealer and Boy Brow. There are currently six shades available, which I’ve popped in below...