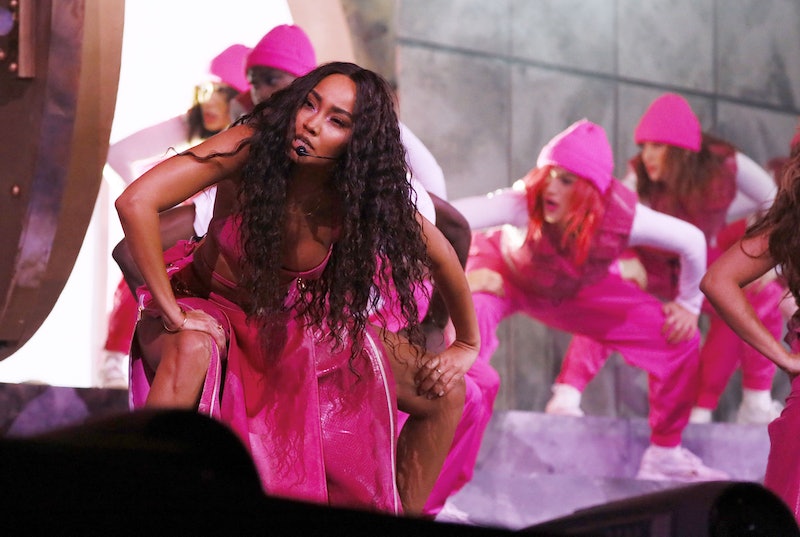 Little Mix are taking over the music world, one song at a time, and I couldn't be happier about it. If "Woman like Me" and "Hair" aren't on your feminist anthems playlist I don't know what you've been doing. And of course not forgetting the hit "Shout Out To My Ex," which, trust me, is the ultimate song to listen to after a break up. And now the girls are turning their talents to other ventures, with Jesy Nelson working on a BBC3 documentary and Leigh-Anne Pinnock a new fashion line. But where can you buy Leigh-Anne Pinnock's swimwear collection?

Fans have always been obsessed with Little Mix's fashion, so they will no doubt be overjoyed that they will be able to shop one of the member's looks. Pinnock started swimwear brand In A Seashell with her childhood friend Gabrielle Urquart, and it looks like they've been working on the collection for some time. So you know it's going to be killer.

Pinnock made the announcement on Instagram, posting a photo of her three women in bikinis (one of which is Pinnock herself, I believe) with the caption:

"So for the past year and a half I’ve been working on something very very exciting with my girl @gabriellenikita we are so excited to reveal we will be launching our very own swimwear brand called @inaseashell a brand that not only promotes self love but encourages anyone who wears it to feel confident and sexy AF! So this summer we’ve got you covered because it’s launching in April!"

Since the swimwear line has only just bee revealed to us, there has been no word on where or when we will be able to get our hands on it. But its launching this month, so the girls have got us covered for the summer months.

Pinnock likes to share the occasional bikini snap on her Instagram so, going from her taste in bikinis, I think we can expect bold, bright colours and gorgeous designs.

Although Little Mix are now one of the world's most successful pop groups, it hasn't always been plain sailing for the girls. Both Pinnock and Nelson have both spoken out recently about the abuse they have received during their time in the band. Nelson's new BBC3 documentary will speak about body image and mental health, and she will talk about her experiences with trolling and how that affected her. In a statement, Nelson described the topics discussed in the documentary as "hugely important" and ones that are "affecting young people today." In an interview with Glamour, Pinnock broke down while revealing the racist trolling she endured and how she was constantly labelled "the black one in Little Mix."

Despite the difficulties Pinnock has had in the best, she's still a total badass, and killing it in both the music and fashion world. This isn't the first time Pinnock has dabbled in designing. Just last month, she unveiled her collaboration with sportswear brand Umbro, which features a lot of cool oversized t-shirts, crop tops, and bright colours. The release date for this swimwear line cannot come soon enough. I don't know about you, but I'm ready to book a holiday now.