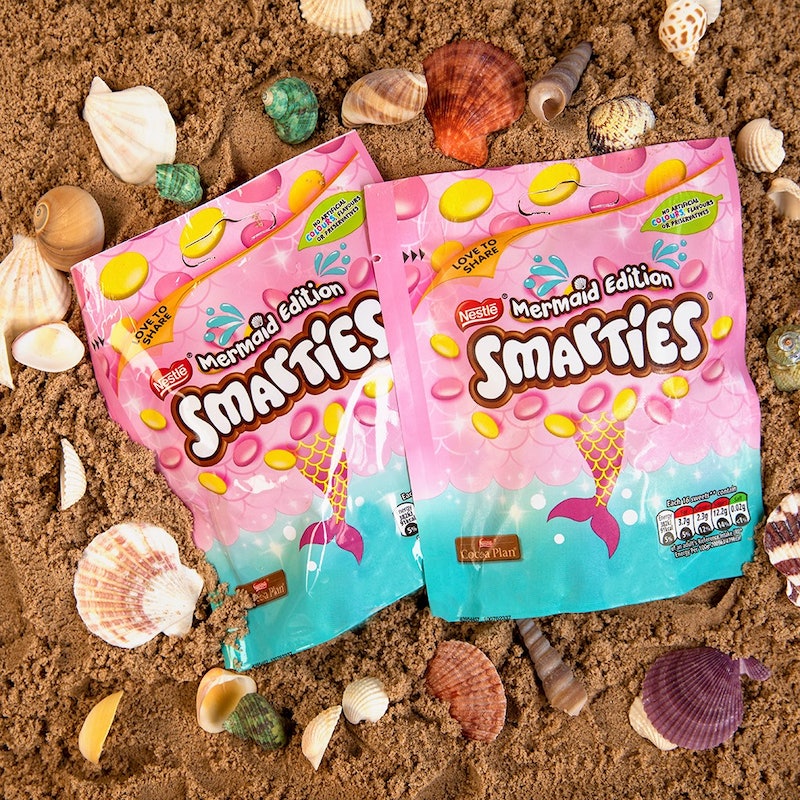 Mythical creatures are captivating enough on their own, but when mixed with sweet treats, they’re even more magical. And one brand that knows how to incorporate these enchanting beings in their products is Nestlé, who have only gone and released a new limited-edition pack of Smarties, this time with an incredible under the sea theme. If you’re in the market for this fin-tastic treat, you’ll probably want to know where to buy Mermaid Smarties in the UK. Thankfully they’re pretty easy to get your hands on, so you’ll be able to experience these mermazing Smarties in no time.

Available exclusively at ASDA, Nestlé’s Mermaid Edition Smarties went on sale yesterday (July 29). So, if you happen to be doing your weekly shop in the supermarket, head on down the confectionary aisle and these pink and yellow beauties will be ready and waiting for the beautiful price of £1.

“We know how much people love these packs and, with mermaids being increasingly on trend, it was a no-brainer for this to be our next limited edition for Smarties,” assistant brand manager Lucy Fawcett said in a press statement. “Of course, it doesn’t matter at all if Mermaids aren’t your thing, it’s still the great taste of Smarties inside the pack.”

Although, these are a limited edition and they’re not going to be making waves for long. There’s no mention in the press release as to how long this edition will be on the shelves for, but the Llama Edition Smarties that were released in March this year are no longer available.

I’ve reached out to a rep for Nestlé to see whether they have a rough timeframe of how long this edition will be available for but have yet to hear back. I’ll let you know if I do.

While the Llama edition wasn’t exactly following the theme of mythical creatures, Nestlé did release a beautiful Unicorn Edition in 2018 during the height of the unicorn craze. The brand has also released other themed packs for the holidays, like their “’Scaries’ for Halloween and an Easter egg version of the popular Unicorn addition, which was launched [this] March,” as Pretty52 reports.

Nestlé also relaunched their Orange Smarties this May due to popular demand, but only for a limited time. These were available in Poundland, B&M, and Home Bargains, so you never know — the Mermaid Edition could swim over to these stores if they end up being as popular as previous releases.

And it’s not only Smarties that are getting these special releases. As noted in the press release, “a raft of new choices were added to the Rowntree’s Randoms range including squish’ems, foamies and sours.” And in March, the UK was introduced to Milkybar Mix Ups, “a range of filled milk and white chocolate buttons marking the first time milk chocolate has ever been used for the original Milkybar brand.”

Basically, Nestlé totally knows what’s up and are catering to everyone’s needs this year. Whether that be a love of mermaids or a variety of choice when it comes to their other products, they’re totally owning 2019.