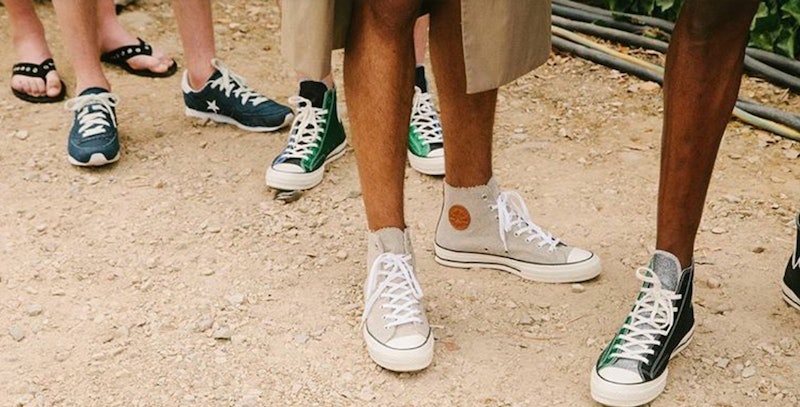 When it comes to avant garde fashion, designer Jonathan Anderson reigns supreme. His brand's 2017 collection included "what looks like cut up pieces of your grandmother's quilt" — but if granny squares aren't your style, there's good news: JW Anderson is collaborating with Converse, so get ready to give yourself the gift of a glitter explosion.

Anderson revealed the upcoming collab with his Spring/Summer 2018 collection on June 14 at Pitti Uomo in Florence, Italy. He told GQ he's worn Converse for years, so when the shoe brand proposed a joint collection, he had to say yes.

In a press release, Anderson said, "From my very first pair, Converse have represented such a radical movement in style and culture. The contrasts and similarities between the world of Converse and the world of JW Anderson creates a space of culture tension that's a dream to play within as a designer."

Snaps of the collection have been released on JW Anderson's Instagram, showing a range of glittery shoes, including tricolor and single-color hightops and a pair of runner-style sneakers with a minimalist Converse star logo.

Fans who are ready to one-click buy everything in this collection will have to put a stopper on their purchasing fingers for now, because Converse and JW Anderson haven't yet announced a release date for these babies. But with fans already clamoring for them, the brands are sure to reveal the date soon.

For now, check out some of the collection below.

One of the few nonglittery looks in the collection, these sandy Chucks are super classic.

These monocolor pairs may be much lower-key than Anderson's other work, but they're still sleek and eye-catching.

Anderson told GQ he was going for a classic, globe-trotting look that would go with the traditional summer uniform of youth.

“When we came to Florence, I would see American and Japanese and British tourists walking around,” he said. “I liked this idea of the kid in a denim short with a T-shirt and a pair of Converse.”

There's no doubt that whenever these shoes are released, they'll be the sneaker of the season.