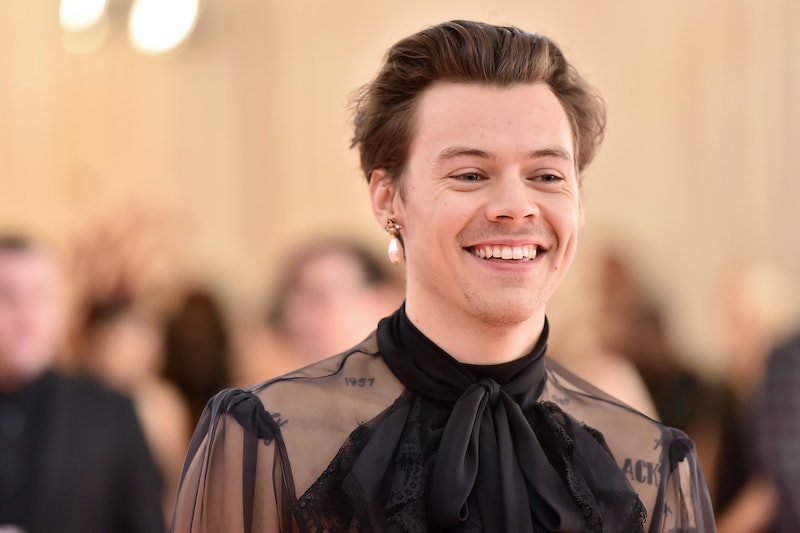 It’s never been as important to have a comfy and cosy home as it is in lockdown. I’ve spent the last two months lusting over home workspaces on social media and covering my room in fairy lights and scatter cushions in a bid to make staying in less difficult. Harry Styles superfans have raised the bar with their creative take on the ultimate lockdown companion. Here’s where to buy the Harry Styles candle in the UK.

After finding out which cologne the former One Direction singer wears, fans found a candle that smells very similar, and voila! The "candle that smells like Harry Styles" shot to fame. The candle in question is Thresholds’ Cashmere Vanilla candle, which is said to smell just like the “Adore You” singer's signature scent, Tom Ford’s Tobacco Vanille fragrance. Both have hints of tonka bean, cedarwood, and vanilla. Heaven.

The candle sold out in the U.S. in moments – where it is stocked at Target for just $9.99 – after it was revealed to leave your room smelling like the “Watermelon Sugar” heartthrob.

News of Styles' signature scent first broke when a picture was taken of him on tour in 2017 by Lou Teasdale, One Direction’s go-to hair and make-up specialist. It was posted to Instagram and entire articles were written debunking every product on his vanity. Described as a homage to London and "reminiscent of an English gentleman's club", it seems fitting that this is his fragrance of choice. Fragrance Today has likened MAC Velvet Teddy Shadescent, Phaedon Tabac Rouge, and l'Occitane Eau Des Baux to Tom Ford Tobacco Vanille, but sadly none are available in candle form.

After it was revealed that the Cashmere Vanilla candle could make your room smell like Styles, Grazia reported that it was snapped up in no time with happy fans rating it five stars. “I know that you're here because it's said that this candle smells like Harry Styles. It does smell like him so go right ahead and purchase,” read one review. Another wrote on Twitter, “y’all freaking out over the cashmere vanilla candle that smells like Harry Styles being sold out when the oil diffuser of the same scent is still perfectly in stock...I decided to snatch.”

While I can’t imagine a more glorious way to spend lockdown than listening to Fine Line in a room that smells like Styles, there’s no getting away from the fact that £66 for a candle is seriously pricey. Fans are hoping for a cheaper alternative to become available in the UK. One fan even wrote: “@YankeeCandle_UK you have made a Luke Brian scented candle, now we need one scented like @Harry_Styles.”

As U.S. fans rave, getting your bedroom to smell like Styles is a little bit more of an expensive dream in the UK. While no dupe for the Tobacco Vanille candle has surfaced yet, Styles’ fans are serious about getting their hands on that scent.

Tom Ford Tobacco Vanille Candle
Harrods
More like this
Harry Styles Just Split His Pants In Jennifer Aniston’s Face
By Sam Ramsden
Harry Styles Has Become An Accidental Vinted Model
By El Hunt
This Girls Aloud x Sugababes Collab Still Hits All The Right Notes
By Sophie McEvoy
Eurovision Has Been Given A Whole New Look Ahead Of Its Liverpool Debut
By Bustle UK
Get The Very Best Of Bustle/UK
Sign up for Bustle UK's twice-weekly newsletter, featuring the latest must-watch TV, moving personal stories, and expert advice on the hottest viral buys.