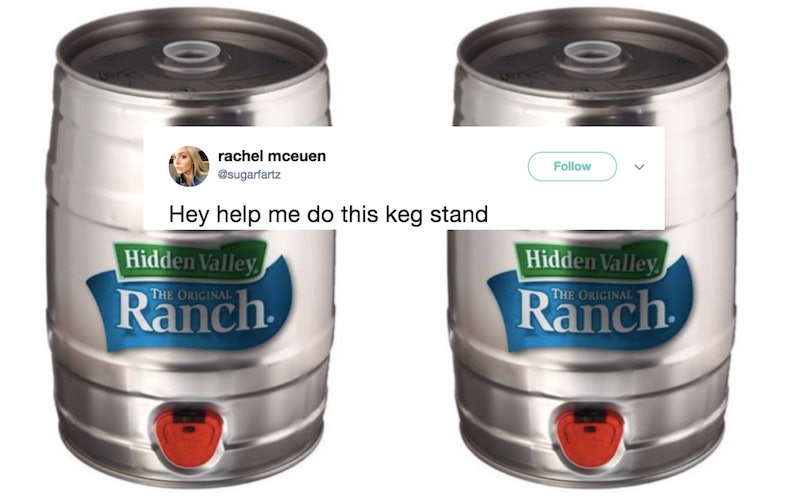 Food scientists were apparently so preoccupied with whether or not they could create a literal keg of ranch dressing that they forgot to ask if they should. So, now we all have to live with the knowledge that a mini-keg of ranch dressing exists and is available to buy online, which is powerful information that I’m not sure the human race is responsible enough to have quite yet.

You can pre-order the five-liter Hidden Valley Mini Ranch Keg online for $50. In other words, you can bestow a great honor upon former U.S. President Ulysses S. Grant by using his monetary likeness to pay for five actual liters of ranch dressing. God bless America.

Pre-orders of the Hidden Valley Mini Ranch Keg will start shipping on December 11, just in time for anybody looking to throw a holiday party or stock their nuclear war bunker.

Purchase also includes a year's supply of Hidden Valley ranch dressing, in case you were worried you would have to perform the sad performance art act of dumping out bottles of ranch into the mini-keg yourself. The listing doesn’t state how much ranch is equivalent to “a year supply,” so your mileage may vary in accordance with the level of your ranch dressing dependence.

Each ranch keg measures almost ten inches high and a little more than six inches wide. They come with such features as a “special inside coating [that] meets FDA specifications and keeps the ranch tasting fresh.” The kegs are also stackable. So, you can buy a dozen, barricade yourself from the world, and sustain on ranch dressing and dreams until 2027.

The internet had some feelings about the ranch keg, as the internet is wont to do. The Twitter reactions to Hidden Valley’s ranch masterpiece primarily ranged from “yes” to “yes...but why?”

One Twitter user suggested charging $5 a person for your mini ranch keg party. It would be Bring Your Own Baby Carrots, obviously.

For those who haven’t been privy to the highbrow cultural discourse on dressing, let me catch you up: People have some feelings about ranch. Last year, The Washington Post published an opinion piece titled, “Ranch dressing is what’s wrong with America.” In it, author Ben Adler described the dressing as “milk rot” and described the act of drenching your food in the dressing as "tacky” and “wrong.” The internet was not happy someone was trying to come for their beloved dressing, with one commenter calling the writer “idiotic, snobbish and judgmental.”

If you want to punish the ranch hater in your life, here’s your five-liter opportunity.

In case a mini keg isn’t enough. You can also buy a Hidden Valley Ranch Fountain, complete with a holiday skirt! The aIger-style fountain can hold two pounds of ranch and has a “heat switch” for...hot ranch? It holds less dressing than the keg and costs twice as much ($110) but also IT’S A LITERAL RANCH FOUNTAIN.

Aside from the idea of hot ranch dressing, I think I...like it? Is my Midwest showing? Whatever. Ranch haters to the left. Leave to me lounge in my Hidden Valley Ranch attire and enjoy my tangy, buttermilk nectar in peace.

More like this
I Tried The $20 TikTok Viral Oishii Strawberries — Here's What I Thought
By Sophie Hanson
25 Things I've Reduced My Life To, In Addition To WFH In My PJs
By Ginny Hogan
13 Selfie Instagram Caption Ideas That Exude Main Character Energy
By Jessica Booth and Emma Carey
TikTok Is In Its Elle Woods Era
By Meguire Hennes
Get Even More From Bustle — Sign Up For The Newsletter