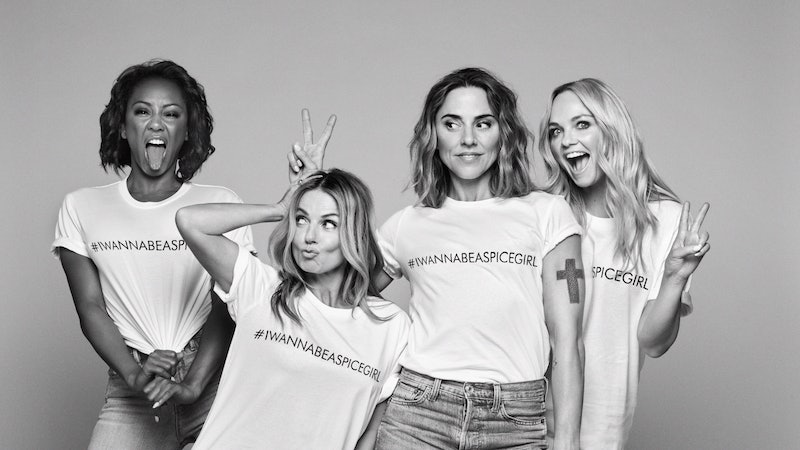 So the Spice Girls are back (minus Victoria Beckham, alas) and it's been a pretty monumental return. Ticket sales for their 2019 reunion tour broke Ticketmaster UK records, and the foursome added multiple extra dates to the run in an effort to meet demand. In the true spirit of Girl Power, the ladies are using their high-profile comeback for good: specifically, they've launched a T-shirt campaign to raise money for Comic Relief's "Power Up" Gender Justice programme. Interested? Here's where to buy the #IWannabeASpiceGirl Comic Relief T-shirt to support the initiative.

The T-shirt, which the Spice Girls announced during their appearance on The Jonathan Ross Show yesterday, is available to purchase online via Represent, priced at just under £20. But the clock's ticking (literally — there's a countdown on the website), as the shirt's only available for three weeks, after which it'll no doubt be sold for unforgivable prices on eBay.

So where will the proceeds go? According to the website, 100 percent of the money raised by the T-shirts will be funnelled into Comic Relief's Gender Justice programme, established to "champion equality for women and girls." Issues the programme tackles include violence against women, discrimination against BAME women, the gender pay gap, and the limited number of women in leadership.

"Equality and the movement of people power has always been at the heart of the band," the Spice Girls said in a statement. "It is about equality for all, 'every boy and every girl.' We recently found out that charities focused on issues faced by women don’t get the funding that they desperately need, so launching a campaign to raise funds for these issues is incredibly important to us and an area we want to support."

Liz Warner, chief executive of Comic Relief, called Girl Power a "shared passion." She added, "Right now, this movement for equality is uniting the world in the most spectacular way and this very generous gift is going to help us support even more organisations fighting for the rights of women and girls here in the UK. We are proud to be the ones to take this forward with the Spice Girls and look forward to seeing the difference we can make together."

If the T-shirt sales approach even a fraction of the Spice Girls reunion tour ticket sales, Comic Relief could do some serious work. According to Ticketmaster's managing director Andrew Parsons, the tour became the company's "busiest ever sale," with millions of fans accessing the site to search for tickets. A moment of sympathy for Wannabe (sorry) ticket holders: at one point, Parsons told Metro, the online queue exceeded 700,000.

The band expanded the tour from six to 11 dates, Metro reports, adding two extra performances in both London and Manchester and one more in Coventry. But according to Parsons, it would take a mammoth tour for the Spice Girls to meet demand. "From what we saw, they could have played nearly every night for a year," he said. Spice fans, if you didn't manage to secure a ticket, maybe throw a few of those pounds towards Comic Relief?