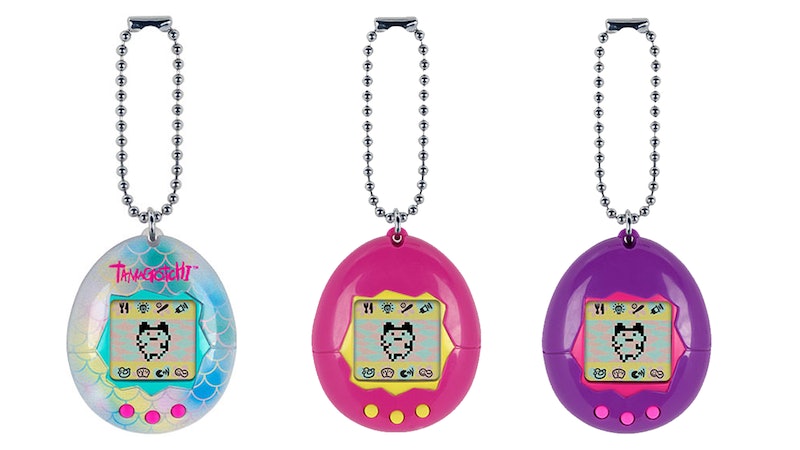 90s kids, assemble! Now is the time to redeem your poor, prepubescent parenting skills because the original Tamagotchi is back, and it probably already needs to be fed. Can you hear the little blips and bloops of cleaning up your digital pet’s poop already ringing in your ears?

Bandai, the brand responsible for our beloved Tamagotchi, has re-released the classic version of everyone’s favorite virtual pet. The Tamagotchi is now available in 16 of the original styles (eight styles for each generation available) including translucent blue, purple and pink, mermaid, and green glitter. I’m already breaking out in middle school anxiety sweat trying to figure out how I’m going to give my Tamagotchi its shots during locker breaks.

You won’t need to travel to the depths of the internet or your parents basement to get your little digital pet bag. You can buy the Tamagotchi through various online retailers including Target, Amazon, and Walmart. Prices vary depending on the style and version of Tamagotchi, but it looks like Amazon has the largest variety of the OG Tamagotchis available for $19.99. Many are also Amazon Prime eligible in case you can’t wait the standard shipping time. (No judgement, if that’s the case. In face, my 12-year-old self salutes you.)

A new version of the Tamagotchi came to the U.S. late last year after being re-released in Japan in early 2017. According to Game Spot, that Tamagotchi had some notable differences from the original Tamagotchi. Namely, it was smaller in size and had fewer features. As Bandai America Director of Brand Management Tara Badie told Game Spot, the minimalized version of the Tamagotchi was intentional: “We’re targeting your generation, who are online and [lead] crazy busy lives. It allows you to kind of relive it, but in a more simplistic way.”

The demand to bring back our digital pets apparently hadn’t diminished since their original launch. “Since the 20th anniversary of Tamagotchi, we received an overwhelming demand from fans to bring the devices back,” Badie said in a press release for the mini Tamagotchis. “By releasing the mini Tamagotchi in these cool colors and new textures, we’re able to reach new fans that come to love nurturing play of Tamagotchi, while also giving existing fans what they’ve been clamoring for – more to add to their collection.” Obligatory props to anyone who still has their original Tamagotchi and extra props if that Tamagotchi is still kicking.

The 2017 mini-Tamagotchi were released in limited quantities. However, it’s still available via some online retailers (Target.com has some for sale for $9.99).

Just this week, a news leak appeared to allude to a collaboration between Pokemon and Tamagotchi. While still unconfirmed, the leak initially spotted by Serebii showed visual assets of a Tamagotchi Nano with Eevee. Those assets also appeared to show Eevee evolving into one of eight evolutions: Vaporeon, Jolteon, Flareon, Umbreon, Espeon, Leafeon, Glaceon or Sylveon. If you heard something, that was just the collective nostaglia of 90s children everywhere exploding into one million joyful butterflies.

This all begs the question: why did we love a toy that did pretty much nothing but poop and die so much? According to VICE, part of the appeal is in that simplicity. As Melissa Batchelor Warnke wrote for VICE, Tamagotchis had needs that were relatable and understandable to kids. Plus, they were dependent on us; “us” likely being a pre-teen just learning the ropes of responsibility and starting to pose questions about their role in other people’s (and pets’) live. “I’m sure even in ancient Greece, the children wished their dolls were alive. It’s a human dream," Adrian David Cheok, Director of the Mixed Reality Lab, told VICE. “But until the technology caught up that couldn't happen. This was the intersection of what children have desired for millennia, and what technology could provide.”

And unlike Tamagotchi, our love for all things nostalgic will never die.